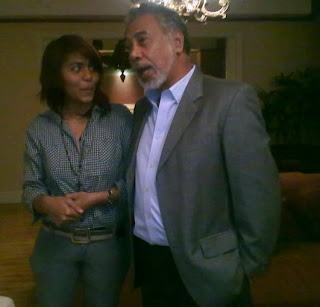 Alexhia Aprilia Simatupang was born on 30 April 1992 in Lospalos the eastern District of East Timor. Her birth father is Jose da Silva Soares and her mother Sabina Ximenes the sister of former Guerrilla commander Mau Nana and Mau Nani. In those days Mau nana and Mau Nani wanted by the Indonesian authorities for the activity against the illegal Indonesian occupation of their country. Mau Nana father is a king of lore was deported to Atauro island and other family members were subjected to human right violation including sexual harassment against his sister. "I want Alexhia to blame me for this situation not her mother or her father. Because I was resisted in the bush that's why my family were victim," Mau Nana the only Alexhia Uncle survived during the 24 years strugle while two other killed.
Her birth Parrent name her her with a catholic name of Beatriz da Silva soares so her mother was confussed when heard her name as alexhia aprilia Simatupang. But Sabina know all the detail and still kept a paper which signed by the head of the villages and village military commander, police commander and several withness. Sabina came from Lore and arrived in Dili this morning to welcome back her lost 18 years old daughter who will return to her birth country on November 3th with PM Xanana.
East Timor’s Pm xanana left Dili on 26/10/2010 for Shanghai Expo transit through Surabaya. The Ex Falintil guerrilla Commander’s in the afternoon of 26/10/2010 meet with the Timorese lost generation Alexhia whose real name is Beatriz da silva Soares last night in Surabaya.
Arround 19.34 Dili time she informed Tempo Semanal that, "I am waiting to see East Timor’s number oneleader. And I am feeling nervous but very happy now.”
After her meeting with the head of East Timor Government finished met Alexhia express her joy. "Pm xanana very kindly person and he will help me to go back to East Timor on November 3th with him on the same plight from Bali. I will travel to bali on November 2th to prepare my travel documents,” she told Tempo Semanal in a phone interview.
She added, “Pm also asked me after visit Timor Leste, and he also told me that i have to come back to finish my study in Jogjakarta. I fell he is very humble and very different leaderships to compare with other Leaders including Indonesian President.”
In the previous tempo Semanal exclusive interview alexhia said is now study international law in a University in Jogjakarta Indonesia but was forced tro stop her study after she was refused the order from her step mother to change her religion to Muslim. “I have a big problem with my step mother because I am refused to join Muslim religion. So she treats me badly and I have had go from the house. My condition was very bad but I was lucky because some Timorese here help me and now I am staying with them.”
“I have no money to continue my study after my step father die and my step mother does not want to pay my school fees anymore.”
Alexhia was selected for Australian youth Exchange program in few years ago always curious when people from Kupang West Timor told her that she looks Timorese. In mid Abril this year she just found out the truth from a Situmpul’s family neighbor that she was adopted from a Timorese family in Lospalos.
“After I heard the information I went to asked my step mother the truth. I keep question who am i actually for several time then my mother was very upset and told me I was adopted from Timor Leste.”
“Then I went to try to find some information and there are people from Lospalos here help me with Pak Antonino do Carmo in Timor Leste. Now It seems clear to me and I need to find out ways and support for me to go back to East Timor.”
“I don’t know yet who can help me to get back to East Timor but I really want to go there meet my family and I really want to be a Timorese citizen.”
Ir. Soerjo Winarno and his wife Atila Banowati came to lore for two days to adopted her. The Indonesian agriculture civil servant knows that alexhia’s parents have no choice to agree with their plan to adopt Aprilia because two of her uncle’s Mau Nana and Mau Nani were Falintil guerrilla members. “They came to the village to force me to give them my daughter. I and my husband were disagreeing to give them our daughter but because of my brothers were in the bush fight for east Timor Independence so we have no choice,” Sabina told Tempo Semanal an hour after her arrival in Dili.
“It was with the help of the villages head Mr. Francisco who dare asked Mr. soerjo to give us a letter as an evidence that he has our daughter. Any everywhere I go and even during the 1999 militia violence we lost many things except my children documents including these photos and letter of Alexhia,” she explained.
Her mother really in a chock that at the end she still able to find her love one. Sabina has sent her elder daughter to indonesia to look for alexhia but no luck. "I am very happy and this is a miracle. I thought I have lost her for ever that's why I keep this document and her photos. But I would like to thank god for this all.
Posted by TEMPO SEMANAL at 01:37

watta good news. this is simply incredible. anyway, Tempo Semanal is getting more and more famous and in line with this i just want to suggest that please the editors of this paper do their job better. i mean there are a lot of grammatical errors in this article. i don't think it is a good way to communicate since Tempo Semanal is getting more and more international in some ways.

I do believe in miracle and miracle do happen motherly loves like she have is so precious nothing can compare to that.hopely you both can find the happiness and all the best luck for Beatriz on her study for the INTERNATIONAL LAW Good luck
Regard
Teresa Gusmao