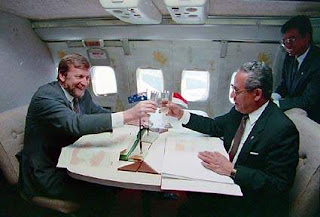 Gareth Evans and Ali Alatas drink to Timor Oil Deal 1989
Not since 1989 when Australian Foreign Minister Gareth Evans gulped down champagne with Indonesian Foreign Minister Ali Alatas over the Timor Sea have Timorese relations been so bad.  In 1989 Timorese watched as the Australian and Indonesian Governments’ stole the future prosperity of Timorese by carving up the Timor Sea petroleum deposits between Canberra and Jakarta.
That was 21 years ago.  Since then the Australian Government has come to the assistance, although unwillingly, of the Timorese people in 1999 and 2006.  However, in 2010 relations between Canberra and Dili have sunk to the point where they can almost no longer to talk to each other.  For example when Australian Foreign Minister Steven Smith proposed to visit Dili meet Prime Minister Xanana Gusmao in Aileu on 14 May Xanana refused.
This is for many reasons.  While the most obvious reason is the disagreement between the two over the Woodside – Greater Sunrise polemic there are many other causes. 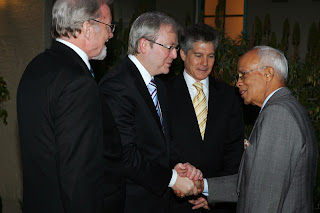 From Left to Right Gareth Evans, Prime Minister Kevin Rudd and Foreign Minister Steven Smith.
Since 1999 the AusAID has provided hundreds of millions of dollars of support for the development of Timor-Leste, but the people of Timor-lest are not sure that they have received much good for this help.  Poverty rates increased, political stability declined (ie 2006), and aid programmes have often failed to provide much.  Amazingly, given its “saviour” role in 1999, the Australian Defence  Force has also been viewed with some suspicion by many Timorese for real and perceived political biases.  The Opposition Party even contends that Canberra in many ways helped Prime Minister Gusmao unseat former Prime Minister Alkatiri in 2006.  And now Gusmao is spending his days traveling the country telling the Timorese people, one sub district at a time,  that Canberra and Woodside are stealing Timorese resources once again – over the Greater Sunrise issue.
Many Timorese argue that AusAID programmes are wasteful and they are achieving little if anything.  Certainly the corruption, poverty, unemployment figures are all going in the wrong direction.  What is remarkable is that AusAID uses taxpayers money to create accountability in Timor, but the projects are not accountable for their failures as accountability is getting worse not better.  Some Australian efforts are worthwhile such as in the water and sanitation and private sector development areas.  But these are rare examples.  AusAID puts millions of dollars into projects in the finance, justice, infrastructure, and media sectors, which are more destructive and productive.  What is wrong?
As the heat rises on Greater Sunrise Timorese and Australians should realize the people in the mountains are beginning to think its just like 1989 all over again.  In those days Timor was a police state under the Suharto regime.  The Australian Government was happy with that as they made oil and gas deals with Suharto.  Since then the Australian Government has changed its face, but has it changed its spirit?
When Timorese see Australian Government programmes in Timor, they usually see high paid consultants on 1000-2500 dollars a day.  Giving Timorese advice and not much more.  Timorese need advice for some things to be sure.  But Australians should know that the Government’s agencies in Dili do not take advice.  They should concentrate on the projects that the Timorese, and not Government, feel are useful.  And reconsider the rest.  If this is not done there is a possibility that relations could get worse.
In 1942 Australian soldiers fought and died alongside Timorese in the war against Japan.  Many more Timorese died that Australians.  Those Australians that owed their lives to the Timorese that were their comrades in arms never forgot their debt to Timor.  Timorese will never forget the debt of 1999 owed to Australia.  But the last Timorese to fight alongside Australians in World War two died this year.  In time memories of 1999 and the debt owed to Australian will fade.  Good relations are based on history but also the present and the future.
Australia needs to know that the poor relations are not just about Woodside.  There is history here.  The history is mostly bad.  If the history is to develop into a better one, pay attention, the time is now.
Posted by TEMPO SEMANAL at 17:33

Tempo Semanal writes: "Some Australian efforts are worthwhile such as in the water and sanitation and private sector development areas. But these are rare examples. AusAID puts millions of dollars into projects in the finance, justice, infrastructure, and media sectors, which are more destructive" /

I think AusAIS's media sector projects in East Timor are also worthwhile. But certainly more should be spent on sanitation, education and agricuture - and less on finance and justice.