FALINTIL-FDTL Sacks Soldiers and Sets Example for the Country

On 25 May 2006 during the political – security crisis that plunged Timor-Leste into chaos FALINTIL-FDTL soldiers shot and killed a number of unarmed PNTL officers subsequent to a surrender in central Dili.
The UN Commission of Inquiry recommended that a number of F-FDTL soldiers be prosecuted for the murder of these police officers.  F-FDTL then gave way for the public trial of 4 F-FDTL soliders and one officer in Dili District Court in 2008.  The four mean were then found guilty and sentenced to 8-10 years each for their role in the massacre.
In 2010 the President of the Republic Jose Ramos-Horta commutted the soliders sentences and they returned to duty in FALINTIL-FDTL.  Some months later one of the men Armindo do Silva, a 24 year veteran of FALINTIL, was retired with full honours in an emotional retirement ceremony.
,
On 27 May 2011 FALINTIL-FDTL announced that the remaining three men were dimissed from military service effective immediately.  Brigadier General Lere Annan Timor, Deputy Commander of F-FDTL, announced that the 3 men were being dismissed subject to a military discipline process.  Lere further explained that the judicial process is over but that the military excersiced its right to enforce military law for undisciplined behavior by the above mentioned soldiers.
According the Tempo Semanal sources inside F-FDTL there may be further dismissals in the future, including the solider that is accused of killing an elderly woman in Balide Dili 10 days ago.
The United Nations and the international community have regularly criticized F-FDTL for its perceived lack of discipline and poor rule of law record.  The recent decision as above is made outside of UN influence according to F-FDTL sources.  The F-FDTL have removed several soldiers in the past 3 years including one involved in the fighting over of a woman with an US Navy sailor in 2009 in a bar in Dili.
One defence force source told Tempo Semanal that while these decisions are necessary there is considerable agitation inside the defence force because police and civilian institutions rarely is ever sack officers or officials for professional misconduct.  He told Tempo Semanal “why us, when we always sacrificed in the past, and not them too?”
Posted by TEMPO SEMANAL at 21:36 No comments: Links to this post

According to the Government press officer, “the UNPOL escort hit his car from behind. Lasama is ok. Now he is staying overnight in Baucau.”
When Tempo Semanal tried to confirm with the UN Spokesperson Ms. Sandra Macguire at 2030hrs local time her phone was turned off.
Tempo Semanal confirmed the story from the Security of State for Security Fransisco Guterres responsible for policing and public safety, which his police trained and mentoring by the UNPOL. Guterres confirmed “yes, but he is ok. The car in the front [carrying Lasama] braked, and the UNPOL escort car hit his car from behind. He is ok.”
In 1991 Fernando de Araujo Lasama was arrested by Indonesian security forces for his role in the resistance to the Suharto regime.  Many others were killed or disappeared once being arrested.  Lasama was imprisoned in Cipinang prison Jakarta along with now Prime Minister Xanana Gusmao.  Having survived the Suharto regime Lasama was nearly killed today by UNPOL incompetent drivers in a card accident.
Tempo Semanal has reported in the past about dangerous UN drivers.  UN traffic accidents have caused much victims in the last tens years.  Tempo Semanal in December 2010 revealed internal UN audits on UN misconduct but the UN still has not responded.
Posted by TEMPO SEMANAL at 21:08 8 comments: Links to this post

UNDP Says Project Complete. Donors Wait for Result. Govt Says UNDP Did Not Deliver.
Tempo Semanal has obtained a letter from the EU to the UNDP, dated 1 October 2010 regard UN Security Sector Reform project conducted by UNMIT and UNDP.
At 1300 pm 24 May 2011 Tempo Semanal called Ms. Mikiko Tanaka the Country Director for UNDP in East Timor for comment on the letter written to her from Mr. Costas Tsilogiannis Charge D’Afair of the European Union delegation in East Timor on 1 October 2010.
When TS ask UNDP Country Director Tanaka for comment she stated she was busy having lunch. When asked again Tanaka stated “I did not know what you are talking about, can you call me later?”
Several minutes later TS called Mr. Costas of the EU asking about the letter in which he and the EU outline concerns about the “Contribution Agreement IFS 2008/21-028 Security Sector Review in Timor-Leste – Capacity Development Facility EU Delegation to Timor-Leste comments to UNDP progress report.”
TS asked Mr. Costas about the letter to which Mr. Costas said he did write the letter. Mr. costas  said “some of the concerns have been answered”.  He also said the “project could have been better”. He said the UNDP and others made mistakes. He said he was unsatisfied with some parts of the the project.
When asked about how the UN misused funds to send people to meetings in Africa instead of trainings in Europe he said “before you publish, lets talk”.
At 4pm TS met with Mr. Costas on the EU Delegation HQ in Acait, Dili, in the old Indonesian army HQ.
Mr. Costas told TS “I wrote the letter because in mid 2010 the UN had still not spent 50% of the money given for the project.  The project started in December 2008 and had duration of 1 year and eight month. But by July 2010, after 16 months into 18 month project only 50% spent. Total budget $2 million."
Mr. Costas also said “After I sent the letter, they responded by speeding up by funding NGO research and establishing National Defence Institute.”
Mr. Costas says the Defence Institute is of concern because while it was established it does not have the staff, resources as required in the Contribution Agreement. This is because it was a rush job.  Also he pointed out that the Defence Institute was made in the wrong place because Ministry of Defence have new building under way in Fatuhada.  Mr. Costa questioned UNDP planning and execution of the multi-million dollar project.
Secretary State Defence Julio Tomas Pinto told TS “UNDP promised 5 staff for the Defence Institute, but until today they did not deliver”.  Pinto said “you can interpret if this is UN a lie or not.”
Mr. Costas said the Defence Institute was poorly implemented because of UN delays.
Some NGOs that got fund for research from the UN SSR project funded by the EU told TS that they were given less time than had been promised and forced into a rush job so that the UN could report to EU that money was spent.  When TS asked Mr. Costa if he knew this Mr. Costa was very surprised. But he said ”overall the project some was some satisfied and some unsatisfied result”.
Mr. Costas said “project has finished but we are still waiting for the final report and for the UN to return money that was not used.”
TS spoke with Secretary State Security Fransisco Guterres the Chairman of UN SSR project management board. Mr. Guterres said “final report has not been submitted, because East Timor’s government will not sign it before they release the Security Sector Survey report.” According to Mr. Guterres “the UN has not released this survey report because the UN does not agree with the contents of the report.” He said the “UN does not like the contents of the public opinion survey because the people say the work of PNTL is better than the work of the United Nations Police.”
Regarding the EU funded UN SSR project Mr. Guterres said “there are some unfinished job, but the project is finished”.
TS again tried to speak with UNDP Country Director Tanaka, but the UN Spokesperson Sandra Macguir said TS has to send question in writing first.   TS received from the UN Spokesperson Sandra Macguir an SMS text “Sorry Mikiko says project was completed including all activities noted in the letter.”
In the letter the EU says the UNDP did not report correctly the financial details for the project activity and costs.  The EU asked UNDP for new report as required by the contract.  Mr. Costas says he still waiting for report, but Ms. Mikiko says the job is done. Secretary State Defence and Secretary State Security say they are unsatisfied with the UN project.
Komplete letter below. 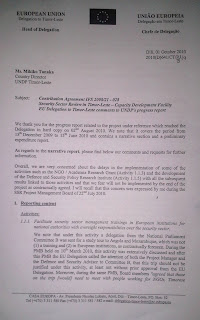 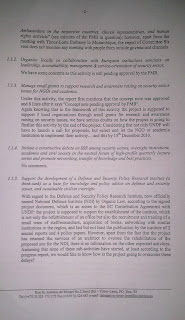 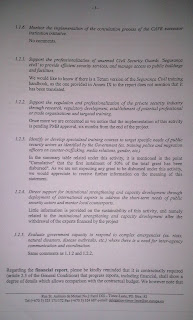 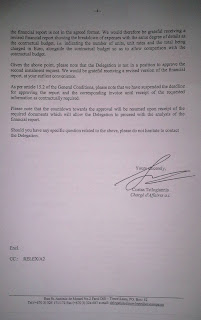 Posted by TEMPO SEMANAL at 12:55 2 comments: Links to this post 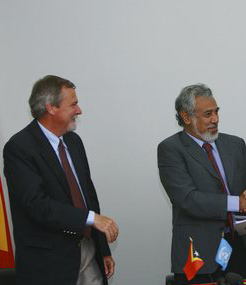 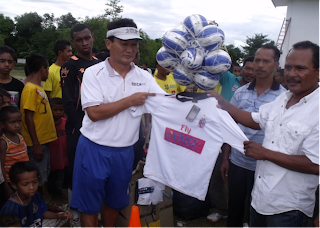 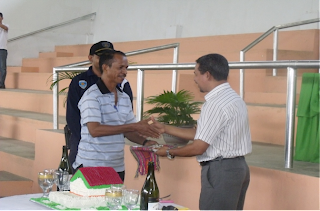