TAUR CONCERN WITH THE VIOLANCE AND SAY SORRY TO THE COUNTRY

The parliamentary election, which ran on the 7th of July, 2012, were very successful and our nation chose and voted for 4 political parties. Even though after the CNRT Conference on July 15th the CNRT members rejected the party to coalition with FRETILIN the violence erupted the capital of the nation and several districts of east Timor. 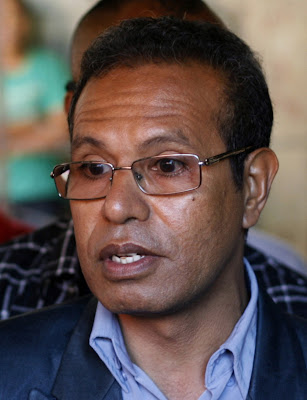 During last monday violence almost one hundred cars been stones more then dozens hospitalize, one dead, some house been burnt including schools building after CNRT vote for FRETILIN to remain as the opposition party for the second term.

During the recent parliamentary electoral process the international community and the President of the Republic saw the following concern – of whether the outcome of this election will be accepted by those who may not be successful.

Taur Matan Ruak said, “violence is not the way to democracy! We all condemn violence!”

Former East Timor Defence force commander furthermore stated, “there is no justification to use violence as a measure to resolve issues. There are political and democratic means to find a way to move forward.”

The four political parties leaders have all pledged to support the President to maintain a calm situation so that once again Timor- Leste can truly show to the world that they are able to move forward on theur own as a nation.

The President Taur, expresses his solidarity with those victims in the violence and apologises to all those who have felt offended, and felt effected in this stage where Timor-Leste is strengthening her democracy to move ahead.

As the President I ask once again that we all are understanding and help each other. What has already passed to put behind us and move forward, to walk together, to raise the profile of our nation and to elevate our dignity.
Once again, I thank you all.

Answered the questions from the journalist on the issue of coalitions between the parties may changed after the violence, Taur said, “President of the Republic does not influence political parties to choose whatever options they may want to choose to lead the nation in the coming five years. The President, in accordance with the mandate, swears in the new Prime Minister and the government of the people - the most voted party with the coalition they may want to choose. The final results shall be declared and published in the nations Official Bulletin. Soon we may see what will happen, whether if what has come out of the CNRT conference will be maintained or otherwise - the President is available. From there the President will announce accordingly. However, all of this will be based on the mandate the Constitution has afforded him.”

He continues, “very soon we are embarking on the process for our new Legislature and the next Constitutional Government and this will begin next month, in August 2012.”

Despite the violence Taur confident that UNMIT still going to leave in the end of this year. “Following this will be the negotiations and subsequent mandate of the UN’s next missions which will be very different to the current one.”

East Timor President thanks to the contributions of everyone – political parties, state institutions, the international community, civil society, religious convictions, security and defense institutions and the people - all have contributed greatly.

“As the President of the Republic, I thank you all. And I ask that the entire nation, all institutions, in collaboration with the President continue preparing for the processes to come to be successful in Timor-Leste’s history,” said Taur.

East timor President also congratulates the four parties who’ve won during the recent parliamentary elections. And the President expresses his admiration and solidarity and complete respect to all the political parties and coalitions that were unsuccessful in this race to maintain their presence in the coming legislature.

During the electoral campaigns of the parliamentary elections were contested by 18 political parties and three coalitions and they were able to go out to the entire nation to inform them of their respective programs and policies.