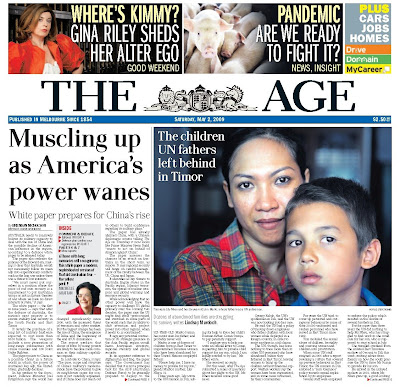 UN Child is Crying for Help in TL

Post September 1999 the UN deployed many peace-keeping forces and Civilian Police to help in establishing stability and peace in the country. The CivPol assisted in providing training for the PNTL and also supported in maintaining rules and order. However some UN staff members have also grew polemics in the head of some Timorese. Lígia Maria Lilly Cruz Nheu / Lilly, 31, is now suffering the attitude of a CivPol member stationed in Oecusse.

She met her beloved 8 years ago when Goran Susnja was carrying out the UN peace mission in Oeccusse. The portrait of the peace-keeping mission’s love memory between Lilly and Goran showed serenity from the enclave, Oecusse.

The two grandchildren of Adam and Eve started to know each other in October 2001 and their relationship were legalized in Oecusse based on the rituals of the Catholic Church, on 14/06/2002. “We are married in the Catholic Church and then I was brought to live with him in for six months. During my stay in , Goran’s family was very nice to me,” Lilly recalled.

“Our marriage was witnessed by my parents and relatives as well as Mr. Fernando Souto from who was also a CivPol,” Lilly wrote in her letter to Mr. Hasegawa and the representative of UNIFEM in 2006. “I have a problem, therefore I filed a claim to the UN in relation to my spouse,” Lilly said.

“I have submitted the claim to the UN since 2006, but no replies. So I went there once again in December 2008 but still there was no answer.”

The letter was intended to seek for assistance from UN’s higher representative in TL to fight for her rights. “I have the right to have food and support for my son. I am now a single parent for my son and it is difficult for me to look after and taking care of him alone. I wanted his father to be responsible. If necessary I will present him to the court,” stated in the first paragraph of the letter.

“I submitted the claim to the United Nations regarding my spouse who worked as a UN Police officer in 2001,” Lilly said.

Twelve days before the first anniversary of the TL’s Restoration of Independence the UN peace-keeper’s love give birth to a son named Marco Nheu. Since 08/05/03 to date Marco has never heard of his father’s voice, that’s why he always asking for his father. “Where is my father?” Marco asked his mother. By taking breath deeply Lilly replied, “Your father is in .”

Upon return from Timor-Leste Goran got another opportunity to work as a UN staff member in . Therefore Lilly also reminds the UN that she does not want “Goran” to give child to the local women in other UN missions, but later not taking responsibility and then escape.”

“It is very much difficult for me to be a single parent. Shortly my son will start to go to school but I am not capable to send him to school. That’s why I will not send him to school even though it is for his future. So, I would like to ask the UN to take this responsibility. So that my son can go to school,” Lilly said.

Lilly and her child came from Oecusse and stayed near the Obrigado Barrack. They stayed in a tiny house in Dili. In the first days of May she was wearing a red blouse with pigtail hair and riding Marco heading towards the direction of the UNMIT Compound in Caicoli. Lilly carries out two functions as a mother as well as a father to sustain for their living.

She provided the reason why she is pursuing the UN to be responsible for the attitude of its personnel, “Because I was married to a UN staff who worked for the UN for around five to six years.”

Last week Lilly went to the UN Human Rights Unit to talk with some personnel there to discuss about the rights of his son. This time Lilly wanted to hold the UN responsible because she has been waiting for three years but the UN has never replied to her case.

“I come back to the UNMIT and to the Office of Mr. Atul Khare, the SRSG, to submit a claim but until no there was no reply. Now I want to hold the UN responsible to support my son.”

“I have problem and that is why I submitted a claim to the UN regarding my spouse.”

She implored the World’s leading peace and stability organization to provide financial support to her son.

Lilly showed doubt when this newspaper was asking whether or not she is faithful that Goran will be coming back to care for his son? “This is why I come to the UN. The UN should be responsible because I married with him under the shade of the UN flag, and three years ago he was still working for the UN, therefore I keep insisting for the UN’s responsibility over my son.”

Marco is growing and he is taller that the children of his age. “I need financial support to care for Marco until he grows up. Honestly as a single mother I cannot do more to find money to help care for my son. Even if I try to contact his father, the father will not be able to support because not even a cent he has never sent me during this six years. What will he send if I force him now? That is why I brought this case to the UN.”

“Few weeks ago I went to the UN to meet with Mr. Atul Khare but one of his staff who attended me and bring me to the Division of Discipline but from then on there is no result.”

“With the advice from some of my colleagues I have gave the information to the UNMIT Human Rights Unit. I met Mr. Lui and have gave him my son’s birth documents and it is now still in the processing.”

At the time this Newspaper tries to get clarification from the UN Special Representative of the Secretary General in Timor-Leste, it was said that there is no time and the Newspapers also tries to ask clarification from the witness who currently worked as an UNPOL where in 2001 was a CivPol in Oecusse but it also cannot be done because there should be an authorization letter from the Public Relation Unit of UNMIT in Caicoli. The UN spokesperson Mr. G. Kakuk said in his office that UNMIT knows about the case referred but he does not want to give comment. “Yes, we know the case but we are not yet ready to talk about that particular case nor other issues because there is possibility of implications to the legal process and this case is still under process,” said G. Kakuk with an angry face.

When this Newspaper tried to ask for clarification about Lilly and her son who are crying for support from the UN, the spokesperson cut the question from the Tempo Semanal by showing his expression of confusion about question. When this Newspaper explained that Lilly was trying to ask support from the UN, Mr. Kakuk’s tone was even getting louder. “I have told you that I don’t want to talk about any particular case. If you are interested about the UN’s general policy regarding the sexual relationship between the staff member with the local women, I can provide you the general policy lines but I don’t want to talk specifically about this particular case nor other particular cases.”

“Primarily, sexual relationship between the UNMIT personnel with the local women is not prohibited, but strictly discouraged.”

“But exploitation and sexual abuse which is committed by the UNMIT staff members is prohibited.”

“The United Nations adopted the policy of zero tolerance therefore there will be serious disciplinary action whenever such cases occur."

“In the cases involving the UN staff members and claims for paternity is not associated with allegations of exploitation and sexual abuse should be solved in accordance with UN’s appropriate legislation or UN’s appropriate administration guidelines that we have which is the general policy we have.”

Even though the UN spokesperson does not want to talk about any specific case but there has been many love affairs that have occurred within the peace-keeping mission in Timor-Leste. And Lilly said that she has been waiting for three years but there was no result so she prefers to choose the Public denounce.

One of the UNMIT staff members said that there have been many cases regarding the relationship between local women and the UN staff member but it needs to be investigated properly.

Maria Manuela Leon, the former director of Fokupers said that some times ago they went to to take the document regarding the attitude of the UN staff members in Timor-Leste. “I think the UN has the responsibility to give compensation to these children.”

She expresses her affliction because at the time they helped in raising the case referred, some Timorese women did not give their supporting data but as now such case already occurs and there has been some courageous women emerging, “I think it is important that the women network organization should provide assistance to demand for their rights.” Maria expresses her affliction regarding the United Nations’ position which is not clear in relation to these cases. She recalled that at the time when they talked with the UN about the case, the UN asked, why shall you questioned about the children of the staff members from other countries, why did not question about the children of Portuguese father who were also many in Timor-Leste. “The UN has never concerned about this.”

Maria promised that she will try to help in raising this issue with her colleagues from women’s network.