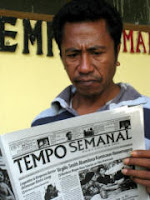 Jose Belo, Editor, Tempo Semanal
On 6 July 2010 Julia Gillard, newly appointed Prime Minister of Australia after deposing former Prime Minister Kevin Rudd in a Cabinet meeting room, has demonstrated that she knows less about Timor-Leste than her predecessor; and shows as little inclination to deal with a neighbor as a friend on equal terms.  It would seem that she prefers to use Timor-Leste for domestic political purposes. Prime Minister Gilliard, has after a meeting with President Horta, announced without consulting with the Timorese Government, an Australian policy to set up a pipeline of Australia bound asylum seekers to Timor-Leste to what is called a "regional processing centre".

Ever since its White Australia policy came to an end not so long ago the matter of illegal immigrants, and asylum seekers has been a hot political issues in Australian domestic politics pitting the left versus the right.However, while the Australian Government seems unwilling to assist Timor-Leste in leveraging Woodside, a major Australian petro firm, into developing downstream pipeline and refinery facilities in Timor-Leste it seems quite happy to unilaterally announce that it seeks to build a "pipeline" to a processing centre for refugees and asylum seekers in Timor-Leste.  So Australia gets the oil and gas and Timor-Leste gets the asylum seekers.  Sounds like a bad deal.  Especially when one considers that the oil and gas is Timor-Leste's, while the asylum seekers are seeking refuge in Australia.Timorese reaction was been swift.  Vice Prime Minister Jose Luis Guterres has said its not desirable, many Members of Parliament and civil society have strongly rejected the proposal.  However on 8 July Prime Minister Xanana Gusmao, in what is no doubt a cute political trick, has suggested that President Ramos-Horta continue discussions with Prime Minister Gilliard.  Political trick?  Well Gusmao knows that Ramos-Horta has no constitutional competency in this area, and so any deal struck can be cast aside.  Unless of course Prime Minister Gusmao is seeking to cut a deal - one which sees the Australian Government strong arming Woodside into a pipeline north to a Timorese LNG refinery in exchange for establishing an processing centre for asylum seekers in Timor-Leste.This however is likely moot as Woodside appears immovable and ultimately its bosses are shareholders and not voters. Although one has to consider that if it chooses Canberra can make life easy or hard for Woodside in many different ways.What is however entirely clear is that Timor-Leste lacks the political interest in a refugee processing centre, domestic political opinion is very much not positive.  Additionally, who would run it? Timorese institutions have enough trouble managing their own affairs. Its hard to envsion a well run processing centre in Timor-Leste, unless its run by the Australians, which is certainly not going to be political acceptable.  Even then would Australia run a centre which is amenable to Timorese sensibilities?  Australia talks about multi-lateral organisations running a centre, such as IOM and UNHCR - which is just a smoke screen for an "Aussie" project.

Australia;s main processing centre Christmas Island is full and being expanded.  But when space is limited look to Timor-Leste it would seem. They did this in Nauru in 2002/3. At one stage Canberra had over 1300 Afghans, Iraqis and others holed up in substandard conditions, in a legal limbo at a Nauru processing centre in 2004.   Australia paid $30 million to the Government of Nauru to operate the centre.  It ended up in massive cost overruns, hunger strikes, human rights abuses - and international castigation.

But Timor-Leste is not Nauru.  Prime Minister Gillard best remember this. 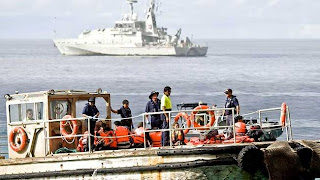 This is a refugee boat landing in Christmas Island in March 2010 - Australia's primary offshore refugee processing centre - with capacity for 2,300 its nearly full. 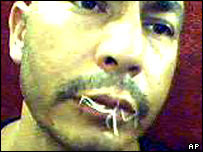 This is an Afghan refugee asylum seeker in Nauru in 2003.  Having stitched his mouth for a hunger strike protesting conditions in Nauru. 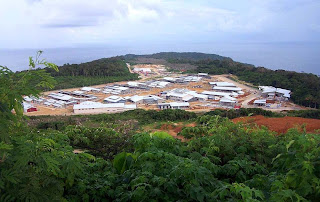 This is the Christmas Island Detention/Processing Centre in 2009.
Posted by TEMPO SEMANAL at 21:49

Your blog is being linked to and read from Australia.

On another occasion, I might discuss some of the issues you have raised.

But right now, our government has done the wrong thing by Timor in its announcement - for which it is also being condemned in the Australian press - and I can only apologize to the people of a friendly country.