Breaking News 12/07/2010
At 12:43 Dili time Fernando de Araujo alias Lasama said, "memb ers of parliament lets us vote on a resolution from the Australian Prime Minister to use East Timor as the refugees processing Centre. Those who are for, abstain or against please vote as you wish." 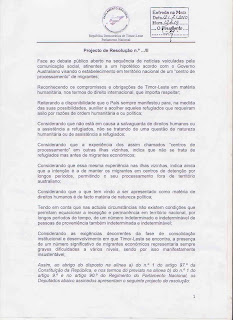 34 parliamentarian from 65 present vote unanimously to dump the Australian Prime Minister's proposal in the sea between Dili and Canberra. "As we just vote on the resolution concerning to the suggestions from the prime Minister of Australia to use East Timor as a centre for the,...to process the illegal migrant. As you know East Timor is a young country and we have no conditions. We still have many problems in this country that’s why the MP’s through this resolution; they rejected the suggestions to use East Timor or Timor Leste for or to process the migrant. Just because we have no condition yet," said Fernando de Araujo alias Lasama. 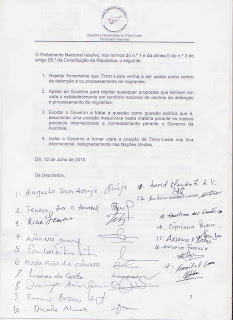 The Australian side have announced that they will send a team to come up to Dili to discuss the process with Timor Leste authority but today the East Timor MP’s unanimously voted in advanced to reject any proposal from Australia. “I think this decision must make by this parliament, according to our hierarchical system is parliament is the one has to decide on this situation so the MP’s already decided. I hoped that the Government of Australia can understand the situation. East Timor is a semi Presidential system which Government need the support from majority parliament to abrove the agreement between the two country but with this event today give no way to Miss Gillard proposal to get near to East Timor. So did you all voted against the Australian Prime Minister’s proposal? Lasama answered, “yes it’s rejected, voted unanimously.”
The same statement came from Arsenio P. Bano, deputy President of Fretilin Party the main opposition in East Timor Parliament. “It’s very important decision have been taking by the parliament on a resolution that voted against the establishment a processing centre a proposal from Australian Government,” said Bano.
He added that, "I think this is very important move that Parliament of Timor Leste voted unanimously on the resolution."
Posted by TEMPO SEMANAL at 18:11