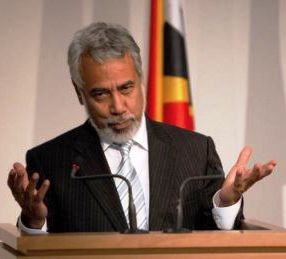 Prime Minister Xanana Gusmao in his speech to the Timor-Leste Chamber of Commerce and Industry said the country economy is growing rapidly, benefiting from substantial investment in the physical infrastructure we need – roads, bridges, electricity, water and waste among others. He also informed the Chambers that his Government Priorities in investing in human infrastructure to improve population’s access to health services and education. He recognised these are all essential foundations for developing a thriving business sector – one that brings better products and services to our people, creates jobs and opportunities for all segments of our society. But in the mean time Time East Timor Freedom Liberation leader recognized the importance of Free East Timor Telecommunication market from Portuguese Telecom Monopoly.
"At the moment in Timor-Leste, all of our electronic information communication is handled by a single company. We are one of the last countries in the world to have this crucial sector still under monopoly. In the South Pacific, countries like Fiji, Papua New Guinea, Solomon Islands and Samoa have all introduced competition and have benefited with better and cheaper services – and more investment in telecommunications networks. Our neighbors in Indonesia, Malaysia, Vietnam, Cambodia and Singapore, all have competition," Xanana said.
In 2002 the under East Timor Government signed of a monopoly agreement with the Portuguese Telecom in the East Timor.
"We have a monopoly for historical reasons – shortly after our independence, we signed a 15 year exclusive Concession agreement with Portugal Telecom in 2002, which owns the majority of Timor Telecom. But these are public services that can’t simply be left under monopoly. Coming out of conflict is no excuse. Lots of countries have had terrible conflict but introduced competition in telecommunications – Afghanistan, Angola, Ivory Coast, Kosovo, Palestine and Rwanda, for example."
"One of the key foundations is our information and communications technology sector. Businesses depend on information – information about prices, about delivery schedules, about product offers, wholesale markets, retail sales, and so on. Just about everything you can think of in business depends on information," Xanana said in his speech.
He said businesses need to be able to communicate that information here in the country and abroad. "We need to be able to communicate with our foreign investors, export markets for our products, trade partners for our imports. We need to be able to communicate with our foreign government and institutional partners," he explained.
"Our economy needs a healthy variety of telecommunications services to grow and to innovate. We need to be able to make and receive phone calls abroad that get through reliably and are at reasonable prices. We need higher speed access to the world’s information highways so that we can be integrated into the world economy."
During Xanana's Campaigned for parliamentary election in 2007 he promised to liberalize the Telecommunication market in Timor Leste and before the chamber xanana said, "I have come here today because I believe that my government and your Chamber can work together in bringing about the next big leap in Timor-Leste’s ongoing development, the introduction of competition to its telecommunications sector," Xanana told the audience.
On June 22nd this year, the Council of Ministers recognized the importance and urgency of introducing reform and competition to the telecommunications. "We adopted the National Telecommunications Policy, which had been launched a year earlier. That Policy states our government’s clear intention to realize three key objectives for the sector: to allow new service providers to enter the market, to encourage a vibrant competitive market and to establish a healthy regulatory environment."
"One of the first steps we have taken to implement that Policy has been to seek agreement with Timor Telecom to transition from monopoly under its Concession to competition. We are aware that in the last few years, Timor Telecom has been making substantial investments in its network and services and increasing its reach to serve more of the population."
"But it is clear that the ongoing monopoly hinders the ongoing growth and expansion of our country’s telecommunications sector – and so our businesses and economy as a whole."
"All over the world, countries with competitive markets for fixed, mobile and broadband services demonstrate every day that competition is the key to investment, innovation and growth. The introduction of competition has consistently brought lower prices, better quality services and more choice."
"With these benefits in mind, our government has delivered a copy of the National Telecommunications Policy to Timor Telecom and seeks to agree the terms of its transition from monopoly to competition without delay. We are targeting the end of October this year for the conclusion of negotiations with Timor Telecom, and plan to license new service providers so as to allow them to start providing services in early 2012."
"We believe that Timor Telecom stands to gain through this. We hope it does – we want Timor Telecom to be a strong and successful telecommunications company. We believe that competition will create a vibrant and growing market in which Timor Telecom stands to be a leader over the long term."
Xanana said Introducing competition and establishing efficient and well-functioning product and services markets will support creation of more jobs, boost productivity and enhances the incentive to invest and innovate. It is essential to the ongoing development of Timor-Leste and for the development of your business. At the moment there are several telecom companies such as Digicel and another indonesian company have indicated their wiliness to compete with Timor Telecom
Posted by TEMPO SEMANAL at 12:26