On Thursday 1 April 2010, Jeffrey Sachs, Economic Adviser to the Secretary General of the United Nations invited the leadership of Timor-Leste's defence force (FALINTIL-FDTL) and national police service (PNTL) to a meeting at the Ministry of Finance, in Dili Timor-Leste. 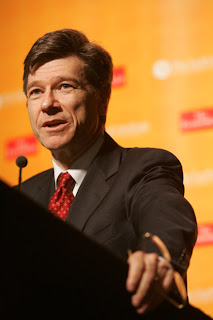 Jeff Sachs
During the discussion Major-General Taur Matan Ruak, Chief of the Defence Force asked about the use of donors funds in Timor-Leste over the past decade.
Major General Taur Matan Ruak
Major-General Ruak stated "I have participated in many discussions with Government and I want to know what you consider to be good and bad practise? He further stated that, "international aids to Timor-Leste in the last 10 years was more or less $12.7 billion but its result was an increase is poverty and unemployment. What are the main issues with international aid? I want an explanation to these questions."
Mr. Sachs answered, "I think this is difficult for me to give an answer but I think the international experts need to consider this question with seriousness and I myself will look at the implementation process closely in the future."  The former guerrilla commander raised the same question to former SRSG Hasegawa years ago, but Hasegawa failed to respond in detail suggesting that it was donor funds as opposed to UN money.
On 7 September 2009 Associated Press reported in "East Timor Aid: Where did the Billions Go?" between 1999 and 2009 that the international community has spent 8.8 billion in aid for Timor but that "little of the money, perhaps no more than a dollar of every 10, appears to have made it into East Timor's economy. Instead, it goes toward foreign security forces, consultants and administration, among other things. In the meantime, data from the International Monetary Fund, World Bank, World Food Program, U.N. Development Program and others show the money has done little to help the poor. In fact, poverty has increased. Roads are in disrepair, there is little access to clean water or health services, and the capital is littered with abandoned, burned-out buildings where the homeless squat."
There are some attempts at increasing the positive economic impact of the international presence in Timor-Leste.  One international NGO the Peace Dividend Trust works closely with international agencies to increase their local procurement in Timor, but it remains a relatively small effort.  Its Senior Adviser Edward Rees told Tempo Semanal "the international community is slowly coming around to the idea that the international presence can be an economic engine to create jobs build the domestic private sector." He further stated "Our Peace Dividend Marketplace project funded by AusAID Norway and others in partnership with the Ministry of Toursim Commerce and Industria while quite successful, remains limited in what it can do partially because it remains on 12 month funding cycles and because it is a relatively small actor in a larger Paris Declaration debate."
During the 2008 Timor-Leste Development partner meeting the Timorese NGO Forum called for "the Government to join our call on international partners to increase local spending, helping to stimulate job creation and build private sector capacity."
President Jose Ramos-Horta also has spoken out in an 2009 interview with Al Jazeera on the matter of how international aid for Timor-Leste has been spent in the past 10 years. President Horta states that if "international aid had been spent in Timor it would have transformed the country....but this is not the case."
In January 2010 the Secretary General reported to the Security Council on UNMIT, which still has a annual 2009-2010 budget of over $200 million, that "“UNMIT is not a negligible factor in the Timor-Leste economy. The Mission spends about $20 million annually in Timor-Leste (for local procurement and national staff salaries), compared with a Government budget volume of $650 million for 2010. The total economic footprint of the Mission is higher, as indirect spending (rent, local services) by the international staff should also be taken into account."
Respected local NGO Lao Hamutuk responded "We urge UNMIT to practice more transparency and local content in procurement and hiring to set a good example for Timor-Leste. In addition, efforts should be made to increase the 9.7% of the UNMIT budget (paras. 137 and 170) which enters the local economy.[11] During the past decade, many international consultants, advisors, “volunteers” and staff have advanced their careers and bank accounts while working “on” Timor-Leste; it is only fair that Timor-Leste’s people also benefit from this money.”
Starting today until 10 April the 2010 Timor-Leste Development Partners Meeting will convene in Dili, Timor-Leste.  The background paper for this meeting states that "progress has been made within the Ministry of Finance regarding the tracking of Development Partner spending, submitted to the National Directorate for Aid Effectiveness (NDAE) as part of the 2010 Combined State Budget."  Timorese civil society will no doubt be interested to review the results of this tracking performed by the Ministry of Finance.
Minister of Finance Emilia Pires, appeared on TVTL national television news on the evening of 6 April 2009 and stated that international partners have not yet lived up to their obligations with regards to the Paris Declaration regarding how Government and donors cooperate on the allocation and spending of donor funds for Timor-Leste.
Posted by TEMPO SEMANAL at 14:39