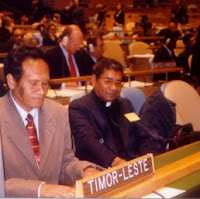 Thank your Mr. Secretary General for your informative briefing

Mr. President, on behalf of Timor-Leste, thank you for holding this important thematic debate and for your kind invitation to join with you all on this very important occasion. H.E. Minister of Finance, Emilia Pires, Chair of the g7+, could not be with us as she is discussing our State Budget in our Nation’s Parliament.
Focused this year on developing our country’s infrastructure and human capital, the budget process is one key-enabling tool to support our Nation’s state building agenda. It is broadcasted live on television and radio networks for 13 days, to the entire country such is the level of public interest in this process.

Today, the situation in Timor-Leste speaks for itself. Even in the face of the global financial crisis, Timor-Leste in these three years has averaged double-digit economic growth. This places us amongst the ranks of the top ten fastest growing economies in the world. Such growth has seen a 9% decrease in poverty, reversing rising poverty levels which peaked at 50% amidst crisis. This decrease saw some 96,000 people lifted out of extreme poverty. Timor-Leste’s 2010 United Nations Human Development Index has recently recorded an increase in rank of 14 places.
Unemployment has plummeted with 96% of men aged between 30-49 currently employed -with two in five women now working year-round. In 2007, 85% of all Timorese were employed in the agriculture sector, and today this figure stands at 67% of men and 61 percent of women.
Much of this achievement has been underpinned through the strengthening of institutions. From the professionalization of the public service to security sector reform and reforming the Nation’s taxation system. From promoting transparency through the establishment of the Civil Service Commission and Anti-Corruption Commission, to reforming Public Financial Management – institutions have all helped to the sustaining of peace through the better delivery of public services. 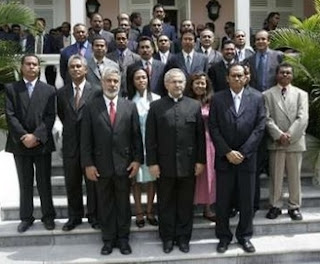 Very soon data on Government expenditure will be available in real-time, to the People via an online portal thus ensuring greater transparency and making public spending more efficient.
Timor-Leste's National Priorities Process embodies this national, home-grown strategic response to the challenges of post-conflict statebuilding. The identification of specific National Priorities in a sequenced manner allowed us to identify and then resolve specific issues. From establishing stability to ensuring food security, these issues required immediate, coordinated and strategic solutions while not distracting us from the larger task of reform.

Emerging from crisis in 2006, our immediate challenge was establishing security and stability so that our People could begin to rebuild. At that crucial moment, Timor-Leste was faced with a defining decision; to whose voice, amidst the offers of international support, we look to for direction. At this time I would like to thank the Secretary General and the Security Council for responding to our request for assistance in a timely manner.

In 2006, crisis affected us profoundly. The Secretary General visited Timor-Leste and his visits to the tents around the city. With 150,000 IDPs living in those tents, at the time, it was a problem that could take decades to resolve but in Timor-Leste with the help of the international community and with representatives of those camps, we were able to solve this problem in two years.

At that time we had 36 countries contributing to the UN policing mission, reflecting a range of policing philosophies.


Faced with the daunting task of rebuilding the public’s trust in our defense and security forces, and trust in our institutions in general Timor-Leste took ownership of this process.

With our security sector, institutional divisions that had once existed were slowly being eliminated through professionalization, better oversight and management. Also with improvements to security infrastructure, salaries and reforms to promotions regimes ensuring merit and ability were restored as key criteria for career advancement. These reforms have also helped to secure peace and stability ensuring that the Nation will not have to face another crisis.

A second key social program that has supported stability has been the recognition of our Veterans through the provision of pensions. This years Budget, the Government has allocated 58 million for this purpose. All those that have experienced conflict understand the need to tackle the veterans’ issue.

These pensions formed one part of a wider, integrated social welfare package, which now includes the elderly and female-headed households.

These reforms heralded the beginning of a new compact shared between Citizen and State. These successes allowed us to say goodbye to conflict, welcome development, it is today our nation’s motto.

Mr. President, we find ourselves in a unique position having reflected upon our past successes. We feel we are now better placed to communicate our lessons learned and to call attention to what we see as being ineffective with regards to the way aid is used to support institution building in post-conflict states.

For Timor-Leste, the International Dialogue on Peacebuilding and Statebuilding, of which we are co-Chair along with the UK, is one very important channel, which we use to engage in open and frank exchanges with fellow member states and regions and our development partners.

At the first meeting of the International Dialogue, hosted by Timor-Leste in April 2010, members stated that we could not hear our voices reflected within the vast body of work dedicated to addressing conflict in our countries. We could not see ourselves in the roadmaps, strategies and policy notes offered.

In response, members agreed to convene four Working Groups dedicated to combining the breadth of experience that conflict affected states and international partners had to offer in order to present a credible and legitimate plan of action for the international community to refer to. These Working Groups focus on Capacity Development Co-chaired by DRC and Japan, Aid Instruments Co-chaired by Afghanistan and Sweden, Planning Processes Cochaired by Sierra Leone and UK and Political Dialogue Co-chaired by Liberia and the UN.

Mr. President, over time, a bond was established between those countries with direct experience of conflict. In fact, this shared experience provided the bridge necessary to identify and connect with a diverse range of countries – all united in the search for peace.

And so, with its foundation set in the same, basic human challenges faced by us all, spanning a diversity of cultures, histories and languages, a forum of post-conflict affected countries was built. This forum is known as the g7+ -a new, independent forum of post-conflict affected countries and regions that have united to form one collective voice to present to the international community.

At the forum’s inaugural meeting in Díli 2010, 13 countries and regions came together recognizing the strong spirit of solidarity between our countries and regions and a strong desire to work together in the g7+ group to share experiences, challenges, failures and successes, to make a rapid transition to sustainable peace and development. Timor-Leste’s Minister of Finance, H.E. Emilia Pires is honored to have been nominated as Chair.

The g7+ now accounts for almost 350 million people. It is the intention of this group to own our nation building agendas, drawing upon the combined wisdom of these 350 million people to provide the international community with the tools necessary to bring about real change.

Mr. President, reflecting on the experiences of Timor-Leste, and considering the experiences our fellow states have expressed to us, it is clear that institutions play a critical role in sustaining the shift away from conflict towards the building of more stable, responsive and accountable States. So we are concerned when we hear repeatedly of situations where the actions of the international community, in this regard, fall short of their promise.

As we said at the MDG summit last year, aid delivery and programs supported by international actors are often inapplicable, unsuitable and incompatible with our agendas and priorities, including for institution building. On that same occasion, the g7+ challenged the global community to commit to a new paradigm of international engagement in conflict affected countries and regions.

Other friends tell us of delays in the setting up of trust funds that are not delivering rapidly and flexibly and thus causing disruptions to aid flows, which then impact negatively upon the abilities of emerging institutions to deliver visible results to the People.

In my country as well as in other countries, the responsibility for coordinating our development partners’ various conflicting policies and practices provides an additional responsibility to our institutions.

To ensure that we can truly rely on our partners, we feel urgent reform and support must be directed towards at least four key areas:

First, international partners must help us build our institutions by working with them – this includes a complete review of the way technical assistance is provided to our countries. This is critical if we seek to strengthen State legitimacy and to build people’s trust in emerging institutions, particularly during delicate transitions.

Second, you can not build a nation upon the principles of another. There is no overarching model that can be applied to solve the unique challenges that face our nations. International actors must appreciate the importance of historical context, culture, regional diversities, linguistic complexities, social differences, ongoing political dissonance and the national mentality; all crucial elements in statebuilding in post-conflict nations.

Third, we must be absolutely clear as to the purpose these institutions are intended to serve and then be relentless in this pursuit. Function over form must take priority. It is only when the tangible benefits of these institutions can be seen and felt that citizens’ confidence, trust and engagement with State institutions will emerge.

Fourth, sustained political dialogue within States, between the men and women that make up our communities and Government, is crucial in order to strengthen democracy and encourage buy-in, turning statebuilding into a nationwide endeavor involving all peoples.

In this regard, and taking advantage of the timely opportunity of this debate, I would like to suggest, on behalf of the g7+, the idea of a dedicated report by the UN Secretary General on the topic of Institution Building in Conflict Affected States.

Mr. President, in closing, all that we seek to achieve is difficult and requires time, however what the g7+ has prioritized and what I have presented to you today are specific, but most importantly, actionable reforms to which the international community must now commit to if our will is genuine. We will work with our development partners through the International Dialogue to elaborate concrete actions that can improve international engagement in conflict-affected states. An action plan will be ready by the end of the year, and we would be happy to share the results.

As member states made clear in the g7+ Statement, our citizens above all states, understand the meaning of urgent action with international partnerships being critical at these times. As Prime Minister Gusmão recently said “This is not the time to be pessimistic. This is the time for hope and change.” It is my sincere hope that the international community takes this message and works with us to ensure that our states are also able to make that smooth transition toward peace and stability.

Thank you, Mr. President.
Posted by TEMPO SEMANAL at 22:42