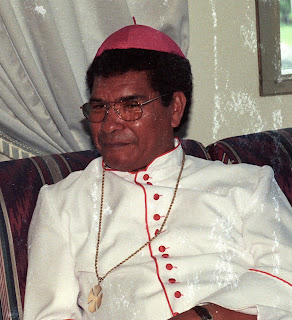 Dili – During the Indonesian military occupation of Timor-Leste, Bishop Don Carlos Ximenes Belo, was the Catholic Church’s figure who was most critical of the Governor Mr. Mario Viegas Carrascalao regarding assassinations of Timorese during the time when Carrascalao was the Governor of “Tim-Tim”. But now when Mr. Mario Carrascalao is strongly criticized by Prime Minister Kay Rala Xanana Gusmao, resulting in Carrscalao’s resignation from his position as Deputy Prime Minister, Bishop Belo says he is saddened because according to this figure in the Catholic Church, corruption will flourish in Timor-Leste.
"I was sad to hear this (resignation of Mario Carrascalao), because when Mr. Carrascalao was invited to join the AMP government, it was with the objective of fighting 'CORRUPTION': But the 'corruptors' were cleverer! The 'Corruptors' resorted to 'a diabolic strategy' to get rid of Mr. Carrascalao. So that thing people refer to as 'political ethics' or 'political morality' does not and will not exist in Timor-Leste, because many do not want corruption to be eradicated in Timorese society," wrote Bishop to Tempo Semanal via email.
According to Bishop Belo, “in any government, the Prime Minister or the President of the Council of Ministers has the right to ‘reshuffle the government’. Inside the government, minister or secretaries of state have the right to resign. “But I am a bit saddened with what has currently happened in Timor, when I hear those in government publicly calling each other words that hurt peoples’ feelings.”
"I am sad because in our nation 'leaders' call each other 'stupid', 'liar' or 'lazy' in public. This does not create a good 'image' for our society in the world, for our own society, and to our youth and children."
"I am sad because, despite Mario Carrascalao having been Indonesian Governor, he also worked for Timor and for Timorese. I have not yet heard of Mario Carrascalao being corrupt, buying cars, building houses in Indonesia, favoring his own family. He is however a person who can contribute to reducing corruption, but in the end it was he who was accused of being stupid and a liar."
"I am sad because the youth, the children are being taught a negative lesson right now from their leaders, who should be better examples for them on 'manners.' If you as a leader call your colleagues 'liars', 'stupid'; in the future, when these youth and the children end up in government or in the parliament, they will also call their superiors 'stupid' or 'liars' or 'lazy'."
"On all of this I humbly ask: What are we opening schools and universities to do? Educate which generation? Educate a generation to enrich themselves with ethical values, or a generation of ill-mannered and ill educated people? Are we opening them to enable a generation to improve their society with their competence and professionalism, make them people who will respect the common good or a generation of corrupt, a generation of people who are ‘stupid' and ‘liars’?"
"My conclusion is simple: You have to apologize, you have to apologize to the youth and children, you have to apologize to the people who live in the rural areas, and maybe take yourself out from the government, and make way for someone with political integrity, morals, patience, respect, humility, and who is ready to give a good example of governance," Bishop Belo wrote in an email to this newspaper on Friday of last week.
Posted by TEMPO SEMANAL at 12:01

He should apologize to Carrascalao - but he never will.