For the first time in Timor-Leste's history the Head of State, President Taur Matan Ruak, has made a public declaration of personal assets. Not only has President Ruak made public his own assets but also those of his wife and children.  In what is viewed by many as a direct challenge to the political elite of Timor-Leste President Ruak has not only submitted a asset declaration but has made the documents public.  Tempo Semanal has obtained copied just hours ago.

In the office of every Minister, Vice Minister, Secretary of State and senior civil servant in Timor-Leste there is talk of this bold step by the President of Timor-Leste.  They know that this action is directly pointed at them. 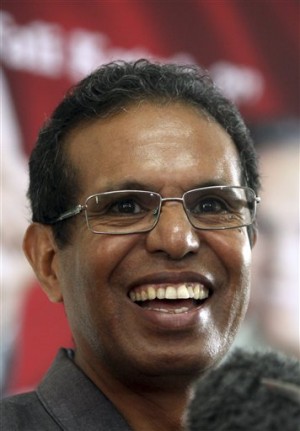 In doing so President Ruak has strongly challenged the Government, opposition parties and the leadership of the civil service to follow his example.

There are growing concerns and discussion in Timor-Leste about the matter of politicians and civil servants making personal asset declaration. Many people said it’s only a kind of maneuver by the politicians. But Isabel Ferreira said, “We will make available to the public the copies of the President's asset declaration so people have full knowledge of what assets the President hold.  Let the people judge.”

“We will distribute the copies of the declaration document of the President's, those of his wife as well as his children.” She reiterates.

"The Office of the President is a public office that I have been entrusted with to perform a constitutional role that is critical to the functioning of the State. The Office is not a tool for my own personal enrichment.


By making this declaration of my personal assets and through annual declarations I shall, in accordance with my responsibilities to all citizens and the Democratic Republic of Timor-Leste, demonstrate that I do not and will not use my position to enrich myself and to practise such corrupt behaviour.
In the jungle we used to talk of a Timor-Leste free of the corruption of others who have come to rule over us. Many Timorese shed their blood for this dream. We must not forget the patriotic ideals that guided us in the past. They are now consumed by the virus of corruption. I call upon all members of government, national parliament, the courts and all public officials to join with me to present full and complete declaration of personal assets annually.
Let us all stand firmly in this fight to make a strong, free and prosperous Timor-Leste. Those who choose not to join in this struggle against corruption should ask themselves if they are truly fit for public office. It is the people of Timor-Leste, whom we serve every day, are the true judge of the credibility of those in public office and in the end our people make the final decision of our fates."

The law indicates that public officeholders must submit their asset delcaration to the court but that it not need be public, but the First Lady said “we want to make it public and if the public wants to know they may come to High Court and ask for it. But President of the Republic want to make it available to the public to allow citizens to act as watchdog on making sure the President follows through on campaign pledges for clean government and good governance.  This is based on the President’s political commitment during his campaign on the issue to fight the corruptions in our young nation of Timor-Leste.”

Former Vice Minister of Foreign Affairs Alberto Carlos, made public asset declarations in 2010, 2011 and 2012.  He was the only member of the AMP Government to do so.

The public is happy with the President attitude to saw the example to the members of public officers in the country. "I think what the President and his wife is doing is good example to the Timorese and will hopefully make those in power to do the same as President did this morning," Pedro Rodrigues  Amaral told Tempo Semanal.