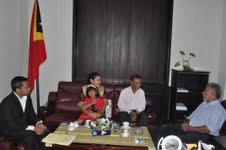 The former member Fretilin Central Committee and the minister for Information and defences Alarico Jorge Fernandes has left Dili this afternoon to return to his home in Indonesia. In dili International airport some fretilin young boys standing around to make sure Mr. Fernandes would not make any statement of apology to the public on behalf of CCF. Acording to Tempo Semanal information said that Alarico have called a press conference in the airport but later some influential people order the airport security to keep the journalist out from the VIP room. “I hope you all understand please don’t in here to disturb mr. Alarico Fernandes. The state recognised Mr. Alarico's participation in the three years strugle by order a civil cervants from presidential palace to organised his boarding pass. The leader of this country really aware the sacrfice of Mr Alarico but some times negleting those who were in the bush for 24 years strugle who is now disable and selling tires on the stret couse he was a simply Falintil Fighter or one stafeta.
Mr. Alarico is look old and he is trying hard to keep his face away from the camera while say good by to those out side the VIP launch. His “Whatever mistake his done its own problem. We don’t want him to use organisation to make an apology to the public,” said one of the boy who seem to be very closed to CCF at this days. 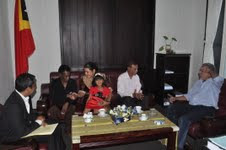 He emphasis again that, “we rejected it.” According to some public statement deliver by many including those who are now in the government said Mr. Fernandes is the most responsible for some of the crimes against his own colleagues after he has surrender himself to Indonesian Army in 1978. Mr. Fernandes surrenders with the only Fretilin Radio which gave the struggle a huge negative impact.
During his meeting with Xanana last week in Dili, the ex guerrilla commander explained to Alarico about how suffered the resistance was and many of the CCF member were killed, surrender which left only two most senior CCF member was Xanana and Ma Hunu. Xanana also explain to him how he was reorganised the resistance to fight for the independence.
Posted by TEMPO SEMANAL at 14:11