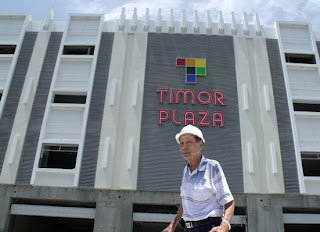 Tempo Semanal 25.10.2010
Jape Kong Su a Chinese Timorese born in Balibo in 86 years ago is the biggest national investor ever from private sector to build the first bigger Timor Plaza.
He has sold out the other property in Singapore and China to bring his money back for rebuild his home country. He is keep his mal in Darwin. Timor Leste's infrastructures were burnt down by pro Jakarta militia in 1999 and some were burn during the 2006 crises.
Many of the Timorese private sectors are waiting for the government projects and while the so called international donors are visiting the country promised to build five stars hotel but until today nothing is happening. Wide Form is an Australian company which awarded government land in the heart of Dili until today no construction yet only a banner. While the Pelican Paradise resort seems like dumping into Tasi tolu because according to a member government said the owner of the company even try to borrow money from Timorese oil fund. "I head the owner of pelican Paradise has wrote to Minister finance to borrow some 1.2 billion from Timor oil fund," said a member Xanana's Government who asked TS no to publish his name.
While jape Kong su is building this Timor Plaza with his own effort no government fund or land involve. "I think he is the best business people and as the government should support people like Jape kong su because he has heart for this country," said Antonio da Silva a Timorese youth was walking passed the street near Timor Plaza. To finish up the first phase building of Timor Plaza Jape Kong Su will spend $1.5 million. In total he will spend $50 million.
Posted by TEMPO SEMANAL at 16:16

As far as I know of, Sutera Harbour is for sale at estimately $500m based on industry news. If I did not remember wrongly, they are diversifying its assets. Hence, I think the Pelican Paradise is unlikely to become a reality anytime soon.

With the current financial climate, it is not surprising that many developers and corporations may have to give up some promises they used to give out.