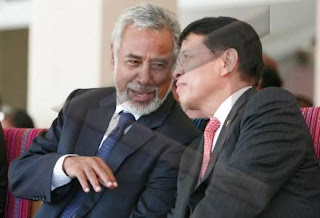 Today La'o Hamutuk NGO held a public meeting in CAVR office in Balide on impunity. The most interesting is Judge Maria Natercia Gusmão (former UNTAET Special Panels judge) will speak together with Martinho Rodrigues (representing victims), Charlie Scheiner (international human rights activist), Celestino Gusmão (National Alliance for an International Tribunal), Vice-Minister Ivo Jorge Valente (Vice Minister for Justice), MP Jose Teixeira (Minister in previous government), Louis Gentile (representative of the High Commissioner for Human Rights), MP Fernanda Borges (Chair of Committee A, National Parliament).
In early December 2008 Judge Maria Natercia Gusmao publicly in an interview recognised the importance of the separation of power between the state organs. “Separation of branches of government is fundamental to safeguarding the rule of law. Otherwise it would be as if we were governed by an absolute monarch who ruled over everything in the country. There must be a separation among the legislative, executive and judiciary branches. This is what ensures democratic rule of law. Therefore, it is important for the courts (judiciary branch) to be independent, and to make their decisions impartially,” she said.
But Ironically on 12 October 2009 during the parliament censure motion as PM Xanana Gusmao's response, "Although she kept insisting – and I appreciate her consistency – that in legal terms there was nothing she could do, Ms Natércia suggested an alternative – and this is something I appreciate a great deal more, as she understood there had to be some flexibility in order to preserve the legal system but at the same time responding to the interests of the Country – and turning to the Minister of Justice she said: ‘Since the prisons are under your charge, you can have Martenus transferred to another location, outside Becora’.
Since PM Xanana Gusmao spoke the words quoted above (translated from Tetum) on 12 Octover 2009, Judge Claudio Ximenes and Judge Maria Natercia herself have both failed to respond to the accusation that it was the Acting President of the Court of Appeal who on 30 August 2009 suggested to the Executive arm of government a legal manoeuvre for the immediate removal of Maternus Bere from Becora Prison - so he could escape justice. Public have found the judges' silence to be deafening! Now, perhaps remarkably, Judge Maria Natercia today speak on the subject of impunity for alleged criminals like Bere!
There are some questions to be raise to her attention such as: In light of the "principle of separation of powers", enshrined in Section 69 of the Constitution of Timor-Leste, why did you on 30 August 2009 participate in discussing with the Prime Minister his desire for a "political" decision to secure the release from lawful custody Maternus Bere; Did you on 30 August 2009 make this statement (or word to the same effect) to the Minister for Justice, shortly before Maternus Bere was moved from Becora prison: ‘Since the prisons are under your charge, you can have Martenus transferred to another location, outside Becora’; If the answer to Q2 is "yes", why did you make that suggestion, if you were aware that the Prime Minister was seeking a way to have Bere released from lawful custody?; Section 30 of the Criminal Code (T-L) states: "The participation in the practice of a crime can have the configuration of authorship, instigation or complicity and can have several copartners of the same fact.; Do you think that on 30 August 2009 you were complicit in the illegal release from lawful custody of Maternus Bere?
(Note: Section 245, subsection 1 of the Timor-Leste Criminal Code: "Whoever, through illegal means, frees or through other means helps in the freeing and evasion of any legally detained person is punishable by imprisonment from 2 to 6 years.").
Judge Natercia hasn't said any thing to the public to defend her self after the statement came from PM Xanana last year. Maternus Bere is freed and Timor the leaders kept saying forget and forgive the past as well as uncertainty on the calling for an International tribunal mean while the civil society still campaign for the justice and have formed an aliance of victims and relatives todemand for an International tribunal. Maternus Bere was arrested in early August 2009 by Timorese police in Suai after some of the Suai Church 1999 complaint to PNTL in Suai. On the 10th anniversary there was some delayed cause the Indonesian demand for the Maternus Bere released before their foreign Minister could participated in the ceremony.
As one of East Timor University Student said UN serious Crimes doing very litle to help end East Timor Impunity for the crimes which took place in front of their eyes during and after the UN referendum. "Rethorically UN keep saying justice for the victims but where is their actioon," Jacinto Amaral questions the UN seriousness.
Posted by TEMPO SEMANAL at 10:09

you guys,,,the so-called "human right activists" are so rigid in rules interpretation...sometimes you have to be pragmatic, which most of you are lacking off...

"...the so-called human right activists are so 'rigid' in rules interpretation"

I always thought that judges are supposed to be 'rigid' when they interpret and apply the law!

What is your opinion, Judge Maria Natercia?