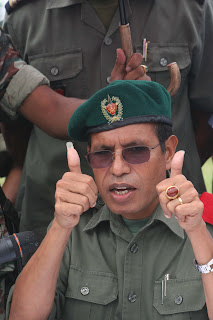 In a joint operation yesterday the East Timorese Navy Force and National Police (Marine) have had caught some Thai 27 illegal fisherman jointly operating with some Indonesian citizen and Cambodia citizen.These 32 illegal joint fishermen are now under investigation. "We have inspected the boat and we identified there were 32 people on board five Indonesian as from Ambon Province, tree people from Cambodia the rest are Thai people. There are fishing equipment in the boat. We have arrest them in the Timor water because there in six miles from the coast."Ironically these people being question by the Thai UNPOL officers who are attach to UNMIT in Dili.The F-FDTL and PNTL conducted the operation after received information from the local community living in south east coat of the contrySince 2002 there have been reports of illegal fishing activities in Timorese water. Not many actions been taken by the UN. The Marine police have no capacity. They are luck off equipment and the boat which donated by Australia are in poor conditions to fight the illegal fishing activities in East Timor.Recently this Timorese Government bought two Chinese patrol boat. “There are many illegal fishing boat in the south coast of East Timor and we already informed to Major General Taur to look after this situation. So now we have a joint operation. Hopefully in the future the two institutions will work together, giving the police side we have not enough equipment. Hopefully we can share the two Navy boat we can minimise these illegal activity to protect the country interest,” said Lino Saldanha.Some international community criticised badly East Timor Government but since it's arrival in Dili on June there have been two illegal boats captured. Recently on 16 September 9 Indonesian illegal fishermen from Flores Island were captured, detained and sent to trial then sent home and on 18/10/2010 the joint operation captured the citizen from three Asian countries. The problem in East Timor is the justice system is still very weak as Lino Saldanha the commander PNTL marine component said, "we have work hard to arrest those illegal fisherman but sometimes the law is not motivate us even make us frustrated."
This operation was using F-FDTL Navy boat made in China. “We used the two new big navy boat.These boat now jointly use by Navy Force and Police Marine,” said Lino
The Timorese community congratulated the PNTL and F-FDTL joint operation. "I am proud of them. The PNTL and F-FDTL is doing great. They should working hand to hand to protect our water. I start like them now. I hope they are not like those UNPOL driven around Dili and seating in bars or restaurant," said young Domingos Maia.
Posted by TEMPO SEMANAL at 19:53