SHRIMPS IN THE RICE 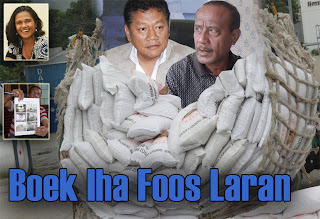 Prime Minister Xanana Gusmao was astounded. He had the list of veterans of the resistance before him, reading each page of the document.  Xanana also thoroughly questioned the veterans who had met with him.  This included Jose “Fo-Laran” da Silva, the CNRT coordinator for the Autonomous Region.

Rice has become a problem. But the problem is not the rising price of rice in the market.  It is however problem because of the involvement of veterans in the rice importation process.  Because of this Jose “Fo-Laran” da Silva together with some other veterans, complained to PM Xanana as the big brother of the veterans.
This issue started in the middle of August 2010.  At that time, PM Xanana, decided on the policy of handing over trust for importing rice from Vietnam to the veterans of the resistance.  Thirty or so veterans were recommended directly by the PM for this.  However, in the end, all manner of companies, which are suspected of having family links with those who work in the MTCI also appeared on the list of recommended companies.  Because of this the final list for companies authorized to import rice increased to 68 companies in total.
“At the time the Prime Minister authorized in writing for only thirty companies, to be recommended to MTCI,” said Jose “Fo-Laran” to Tempo Semanal, Friday (11/02/2011) in Bidau, Dili.  Fo-Laran was the veteran who provided the recommended list of veterans to PM Xanana for his authorization.  According to Fo-Laran, this number suddenly increased steeply.  He became suspicious.  Many of these companies that were now included on the list of authorized importers, were owned by persons who had not participated in the resistance struggle. It included some Chinese businesspersons.
Upon the MTCI list being made public, Fo-Laran verified with the Prime Minister the number of veterans who had been recommended.  “The Prime Minister was surprised.  Because the number of companies on the MTCI list had increased sharply and not in accordance with the PM’s recommendations,” said Fo-Laran.
He and his veteran colleagues also asked MTCI to show to them the Prime Minister’s despatch for the 68 companies.  However, MTCI refused to disclose it to them, because they had the Minister’s instructions that veterans who did not have registered companies could enter into joint ventures with other businesspersons in order to gain access to the rice importation projects.
Jorge Alves “Wemori”, a veteran who is involved with the company Bele-Bele told Tempo Semanal that he obtained a recommendation from the Prime Minister, but concedes that the information provided by the veterans as to the number of companies authorized by the PM is correct.

According to Wemori, those who got recommendations directly from the Prime Minister numbered about 20 or so. But, during a meeting with the Minister for Tourism, Commerce and Industry, Gil Alves on 3 June 2010, a total of 62 companies were included on the MTCI’s list of companies authorized to import rice from Vietnam.
“Wemori” accepts that many of the companies on the MTCI list are not ones operated by veterans, nor did they have the Prime Minister’s recommendation.  More so the veterans believed that list of 62 presented by MTCI was the final and complete list.  However, as has turned out this list was again increased.

Bader Alkatiri from the company Cavalo Bravo Unip, Lda, who is also on the list to import rice, says that at the meeting 60 companies were identified, but that he does not know how or why the list increased.

The director of the company Bele-Bele, Sansao Gomes who was trusted to negotiate with the Vietnamese exporters, said that he was informed in a meeting with Minister Gil Alves that all 68 companies on the list were recommended by the Prime Minister.  “But subsequent information I heard is that there was also a despatch from MTCI and the deputy PM, and I am a little surprised with this,” said Gomes.

There is also information from some that problems arose during the meeting with Minister Gil Alves because of the sudden increase of the companies on the list.

No Priority for Veterans
The project for the importation of 30,000 tons of rice, with a budget allocation of US$17,500,000 allocated to MTCI for the 2010 fiscal year, was intended to give priority for veterans so as that veterans could also get a small benefit. However, when this process passed to the hands of the MTCI, it went in a different direction.  MTCI opened it up for opportunity to all national companies.  It did not look to see whether they were veterans or not.
The director general of MTCI, Georgina Corte Real said that this project did not give any priority to veterans.  All national companies who met the criteria could submit to the process.
“We considered all national Timor-Leste companies. The word veteran does not exist in this process.  We just want to say that all national Timorese companies in whom MTCI has confidence and who meet the procurement criteria will be awarded contracts by MTCI,” said the Director confidently.

According to Bader Alkatiri, at the first meeting with Gil Alves at the Old Market site, he also said that, this is a project for the veterans, but the path is not closed for other companies who want to come into it.  “Individual businesses can come forward alone, not needing the backup of the veterans,” Bader pointed out following the Minister Gil Alves’ words.

When Tempo Semanal sought confirmation of this directly from Minister Gil Alves, he tried to cover up holes in the story and defend himself.  He said MTCI gave superior attention to the veterans. Because of this priority was in fact given to veterans who were recommended by the Prime Minister, Deputy Prime Minister and Secretary of State for Veterans Affairs.

Despite this Jose “Fo-Laran” da Silva asked the Minister and Director General of MTCI to be a little more honest. This project was allocated for veterans, not for national companies or businesses, and it was for this reason that it did not go through a normal tender process.  Because of this, he has asked MTCI not to manipulate this process. “These people who occupy these positions instead of serving the people they are suppose to serve, they have served their own families and friends,” Fo-Laran accused. TS
Posted by TEMPO SEMANAL at 15:10