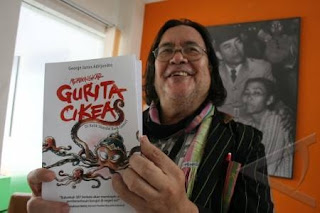 By George Junus Aditjondro
Now that Mubarak has been expelled from his throne, who will rule Egypt in the coming decades? The radical Muslim movement, Ichwanul Muslimin (the Muslim Brotherhood), popularly known as al-Ikhwan? Or the military, which has been instrumental in dethroning the increasingly unpopular dictator?
Unlike the former Tunisian dictator, Ben Ali, his  Egyptian counterpart only moved his family to their holiday resort in  Sharm al-Sheikh, a Red Sea tourist resort on the Sinai peninsula. This shows that, just as in the case of Soeharto, the 82 year old former Air Force Admiral seems confident enough that no legal action will be taken to repatriate his overseas wealth, or confiscate his wealth in Egypt.
Mubarak’s family’s  wealth is worth between US$ 40 and 70 billion, which is safely stowed in European banks and in luxurious properties in Egypt, the U.K., France, and the U.S. This includes the 8,5 million poundsterling house at 28 William Street in Knightsbridge, London (Kompas, Feb. 14, 2011; Seputar Indonesia, Feb. 21, 2011). Soeharto’s family wealth of US$ 15 billion (Time,  May 24, 1999: 16).
The former Egyptian First Family’s departure from the palace yet still staying in Egypt seems to be a compromise between Mubarak and the armed forces, although it was Vice President Umar Sulaiman who announced the former president’s resignation. Thus, one can say that the general chief of the Armed Forces, Field Marshall Mohammed Hussein Tantawi, had carried out a blood less coup d’etat (Media Indonesia,  Feb. 14, 2011; Tempo, Feb. 20, 2011: 96).
Tantawi and Umar Sulaiman are the two most probable heads of Egypt’s interim government, since they head the two most powerful factions in the Egyptian armed forces. Tantawi heads the Supreme Council of the Armed Forces, or al-Geysh, while Umar Sulaiman oversees Egypt’s Intelligence Services, or al-Mukhabarat, which is loosely associated with the Army.
Al Mukhabarat  is charged with international security and countering the external Islamist militant threat. Sulaiman does not have a strong base of support at home, but is strongly supported by  Washington and Tel Aviv, and is groomed by the US and Israel to become the next president. In contrast, Tantawi  has a domestic base of legitimacy and respect. So this plays out as a very critical struggle between Mukhabarat and Geysh, that is, between Sulaiman and Tantawi. Since the police and security forces have done most of the repressing and torturing, the Geysh has kept their hands clean.
Tantawi  is very well trusted by the US, since he fought alongside US troops in the 1991 Desert Storm (Washington Post, Feb. 14, 2011). Nevertheless, as Egyptian political economist Samir Amin wrote in the Monthly Review  of Feb. 3, 2011, the US scenario for the post-Mubarak era is a combined regime of “political Islam” and the military intelligence, favoring Umar Sulaiman as the next Eyptian President.
The fulfillment of this scenario will depend on the result of the forthcoming elections. In case of the parliamentary elections, Al-Ikhwan is likely to emerge as the key player. Washington has already baptised Al-Ikhwan, which currently favours the free-market system and took a position against the Egyptian workers’ strikes in 2008 – as “moderate”, rather than “fundamentalist”, according to Farooq Suleria’s analysis of the key players in Egypt’s political arena.
Samir Amin’s forecast of post-Mubarak Egypt has already occurred in post-Soeharto Indonesia. An alliance between political Islam and active and retired generals have dictated Indonesia’s political arena. The Prosperous Justice Party (PKS), one of the largest Islamic political parties, was inspired by Hasan Al-Bana (1906-1949), who founded Ikhwanul Muslimin. Al Bana’s books are also widely read by Indonesian Islamic activists. PKS’s ideology, however, has been tainted by pragmatic elements in the party, who nominated former Indonesian dictator Soeharto a national hero.
Meanwhile, Indonesia’s ruling parties have many retired generals in its top leadership, who are still very well respected by the military rank and file.
This alliance between political Islam and the intelligence network is strongly countered in the parliament by Megawati’s opposition party, the Indonesian Democratic Party of Struggle (PDI-P). Similarly, 18 days of anti-Mubarak demonstration on Tahrir Square brought together thousands of Muslims and Christians, nationalists, liberals and socialists, young and old, men and women, who will prevent Al-Ikhwan from writing the shariah law into the new Egyptian constitutions.
Unfortunately, reflecting on the frequent religiously-motivated riots in Indonesia in recent years, this is what differentiates post-Mubarak Egypt from post-Soeharto Indonesia. The recent attacks on Ahmadiyah followers in Pandeglang, Banten, and on three churches in Temanggung, Central Java, are just examples of creeping religious intolerance.
Since the Indonesian police seems to be powerless to quell and prevent these riots, although their intelligence agents had forehand information about the planned attacks, the riots promoters may have been associated with forces more powerful than the police. Or, as some analysts have concluded, the riots may have been part of the diplomatic pressure by Indonesian security forces to wrest more “security aid” from Western countries and Western corporations, to show those Western entities that Indonesia still harbors religiously-influenced “terrorists”.
Hopefully, Egyptian minority groups, like Coptic Christians, will not suffer from this type of “homegrown terrorism”.
The author teaches at the Religious and Cultural Studies post-graduate program at the Sanata Dharma University in Yogyakarta.
Notte: DR. Aditjondro sent Tempo Semanal to republish this article which he said it's already published by The Jakarta Post, Friday, February 25, 2011,
Posted by TEMPO SEMANAL at 23:30