TL Will Send People To Help Clean UP Tsunami Destruction 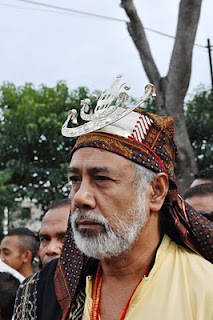 The Timor-Leste Prime Minister, having arrived last Saturday (12/03) from a three week visit abroad, immediately called this Council of Ministers extraordinary meeting, to which he asked for the presence of the Japan Ambassador in Timor-Leste.
Kay Rala Xanana Gusmão personally presented his condolences to Iwao Kitahara and informed the Japanese Ambassador about the Timorese Government’s intention to prepare the quick dispatch of a support team and to know the country’s most urgent necessities, at this time.
Through this personal consultation with Iwao Kitahara, the Council of Ministers’ purpose was to coordinate, in the best way possible, this first mission of a Timor-Leste team giving support to a country that has suffered a natural disaster.
"As a consequence of the violent earthquake and consequent tsunami, that affected Japan, and caused a great devastation and a high number of deaths, the Council of Ministers, in an act of solidarity and fraternity (fundamental principles recorded in the Timor-Leste Constitution) decided to approve the dispatch of a team of one hundred persons to help in the debris removal.
Within this week, the Secretary of State for Professional Training and Employment will go to Japan to prepare the arrival of the Timorese that will help Japan during one month, a period that can be extended according to the Japanese necessities. Bendito Freitas will lead this support team, composed of elements of the Falintil-Timor-Leste Defence Forces, Timor-Leste Police Force, Red Cross, youngsters, a small medical team and translators.
Japan is the biggest ever donor to East Timor's reconstruction since 1999 destructions. Japanese aids have been spent on the building road, bridges, ports and Irrigations systems. (TS)
Posted by TEMPO SEMANAL at 13:41

I personally think this is the best solution for building solidarity and fraternity between two countries. The prime minister's idea is great because japan has spent lots of time to helping the infrastructure and rehabilitation in our lovely country.
Japan, you are the strongest county, we all timorese give our condolence to you!

Just what Japan needs, another 100 mouths to feed accomodate transport etc. The Japanese are not short of manpower, many have lost their places of work. They have experts from arround the developed world helping already. Timor Leste is so desperatly poor that we should think twice about such waste of money. The air fares, hotel bills etc will be enough to feed school meals for at least one year. The school feeding program is in trouble and charity begins at home.

Writers are not appreciated enough, thank you for taking the time to post this.