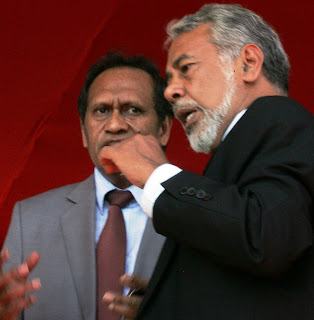 Acording to Tempo Semanal source withing East Timor Council Minister said that Deputy PM Mario Viegas Carrascalao has abandom the Councille Ministers meeting this morning after several time interfiering PM Xanana's statement. "Deputy PM for administration Mario Carrascalao just walked out after PM asked him to be quiet but he left the meeting and threateng not to participate again the councille Minister meeting" said ts source inside the councilled minister meeting room.
Every week on wenesday as normally East Timor council ministers are seating. The council Ministers meeting is participating by the two deputy PM and the ministers in the AMP government.
When Tempo Semanal asked his office said Deputy PM is participating in the councille ministers meeting. There were information that Deputy PM is going to hold a press conference to talk about the issue but Carrascalao office said has no plan.
"I think PM Xanana need Carrascalao and PSD other wise AMP government may collapse if PSD is out. Same as the PSD is need Xanana for their position because without Xanana they may have no change again in the government," said Agapito D. R.Ximenes student of a University in Dili.
He added that, "what ever happen Deputy PM will return to councille miniters meeting as hisd president has did say sorry to PM after threatening of resigned for his post as foreign Minister but affraid to do so."
Posted by TEMPO SEMANAL at 19:41