Two Indonesian Employees of BTK Arrested by PNTL: Suspected to be drug dealers.

Two indonesian citizens employed by Holiwono Lda owned by Frans BTK were arrested by the Policia Nacional de Timor-Leste (PNTL), Timor-Leste's National Police Service on Monday the 09 August 2010 at 2200hrs.  They were arrested on suspicions of dealing in Sabu Sabu narcotics/drugs.

Suspect No. 1 Ahmad Irfan born in Makassar Sulawesi on 28 April 1983 entered Timor-Leste on 28 April 2007 to work as an engineer at Holiwono Lda.

Suspect No. 2 Dedy Edwin Setiawan born in Blitar on 27 January 1982 arrived in Timor-Leste in January 2009 to work in the accounting section at Holiwono Lda.

Both suspects reside at the BTK compound across from Democracy Field in Audian, Dili, Timor-Leste.

A red motor bike with plate number 0911 TL, came out from the "BTK" gate towards a small Indonesian warung right in front of BTK Office a few minutes before the arrest took place.  They were carrying a bag.  They sat in front of the warung near a tiga roda.  A car was parked nearby.  A woman walked out towards them.  She handed to one an amount of USD cash - Tempo Semanal viewed the cash to be 20.00USD notes.  One of the men handed over what is suspected to be a package of sabu sabu.

At that moment two men approached them.  One of the men, wearing, shorts, pulled out a pistol on seeing the two suspects attempt to escape.  The pistol bearing man shouted.  "Do not run, or I will shoot you!" and then, "stay in your position and do not move."
Then Mr. Ahmad Irfan lay on the ground and some more police came and took them away with the evidence.
Pedro Belo Dili District Commander for PNTL told Tempo Semanal this afternoon that the suspects remain in detention at PNTL District HQ in Kaikoli Dili. 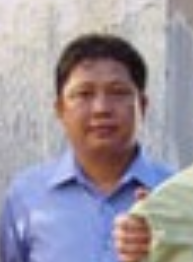 Left: Frans BTK: Holiwono
East Timor is at risk by the drugs and people smugglers from Indonesia and elsewhere. The President of Timor-Leste Jose Ramos-Horta has expressed concerns over drug operations in East Timor.
In the capitol of Timor-Leste many brothels are being run and are often using women from Indonesia, China and other Asian countries.  Indonesian law is very tough on drugs and some people are executed for drug related offences.  There is some question as to whether or not these two suspected Indonesian drug smugglers will be released or charged with crimes.  One source close the investigation doubt's that the owners of Holiwono BTK will be held to account if connected to the crimes (as the authorities suspect his involvement), saying "he is very influential businesman and closed to the politians," said a PNTL Commander who has asked not to named.
Posted by TEMPO SEMANAL at 01:27