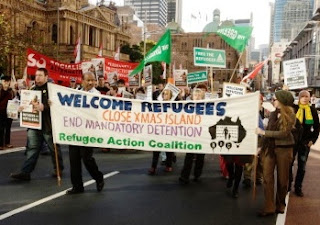 The Sydney based Refugee Action Colaition have called on the Gillard Labor government to scrap its proposal to build a Regional Processing Centre in East Timor.
"The regional processing centre proposal was always about Australia avoiding its obligations to asylum seekers under the Refugee Convention. Now the leaked 'Regional Assessment Centre' document has revealed more detail, it is even clearer that the Gillard government is trying to deny asylum seekers' their rights and dump them onto East Timor," said Ian Rintoul, spokesperson for the Refugee Action Coalition.

"The arrogance of the document is astonishing and is certain to result in even more opposition in East Timor and Australia. There is no commitment from Australia to guarantee resettlement of successful refugees. The document even proposes using East Timor's reputation to play a leading role in diplomatic efforts to attract new re-settlement opportunities.

"It is also obvious that there is no commitment from the UNHCR to support or run the centre and like Nauru, Australia would provide refugee assessment officers if the UNHCR was unwilling to be involved. Curiously there is no mention of the mental health needs of asylum seekers despite the mental health crisis that exists in Australia's detentionm centres."

The Refugee Action Coalition has been working with East Timorese NGO's to build opposition to the regional processing centre in both East Timor and Australia.

An "Open Letter President Jose Ramos Horta and the people of East Timor" (see below) has been circulating for a few weeks and has been released on RAC's web site www.refugeeaction.org.au

We, the undersigned supporters and advocates for refugee rights in Australia, are writing to encourage you to reject Australian Prime Minister Julia Gillard's proposal to establish a regional asylum seekers' processing centre in Timor-Leste - her so-called "East Timor solution".

Her plan for a new offshore detention centre in Timor-Leste is nothing more than a new version of the former Howard government's discredited Pacific Solution.
Offshore processing is an attempt by the Australian government to avoid its obligations to protect asylum seekers. The Pacific Solution was established to prevent asylum seekers reaching Australia by boat, and to push countries other than Australia to accept those found to be refugees. It was internationally condemned.

Prime Minister Gillard claims her approach is different because she wants to involve the UN refugee agency, the UNHCR. But the UNHCR has not indicated its support for the centre and opposes any attempt by Australia to use the regional processing centre as an alternative to processing asylum seekers in Australia. But that is exactly what the Australian government is proposing to do - intercept boats on their way to Australia and divert them to Timor-Leste. The Australian Prime Minister said on 6 July 2010, "Arriving by boat would just be a ticket back to the regional processing centre".

The UNHCR, Amnesty International and the Australian Human Rights Commission have all expressed their opposition to offshore processing as it occurs under Australia's jurisdiction on Christmas Island.

In any case, the UNHCR already processes asylum seekers in countries in the region including Malaysia and Indonesia. There are an estimated 3200 people registered with the UNHCR in Indonesia, but in 2010 Australia accepted less than 100.

The Australian government has committed only to taking its "fair share" of refugees from any regional processing facility. New Zealand has indicated that it will not increase its present quota of 750 UNHCR refugees.

Asylum seekers on their way to seek protection in Australia are Australia's responsibility. Timor-Leste and the other poor countries in the region should not be expected to take responsibility for them.

Conditions in the Australian mandatory detention system alone raise sufficient concerns for Timor-Leste to oppose the regional processing centre. The policy of imprisoning asylum seekers arriving by boat is a clear breach of the UN Convention on Refugees, which clearly states that a person must not have penalties imposed on them because their arrival is unauthorised. The UN Human Rights Committee has also found that mandatory detention breaches the International Covenant on Civil and Political Rights (ICCPR).

Timor-Leste was founded out of its own long struggle for human rights for its people. We believe the Gillard government should be upholding the rights of asylum seekers in our region, not undermining them. We note that the Timor-Leste parliament voted in July 2010 against hosting a regional detention centre. There is widespread opposition in Australia to our government's proposal.

We hope that you will uphold the rights of asylum seekers under the Refugee Convention and other international conventions such as the Convention Against Torture and the Rights of the Child, and say no to a regional processing centre in Timor-Leste.

Australia is by far the best equipped, and the best resourced country in the region to process and resettle refugees.
Posted by TEMPO SEMANAL at 14:00

How about those rich Aussies from the Refugee Action Coalition visit the poverty in the Covalima and Bobonaro districts!

How about the Australian government builds a port in Suai and lengthens the runway at Suai airport to international standards!

My concern is the consequences of a processing centre in Ti-Les exposing to the Maubere the reality - that asylum seekers in the centre will have better and more food than the "free" East Timorese, some of whom resort to eating tree roots during the "musim lapar" (hungry season).