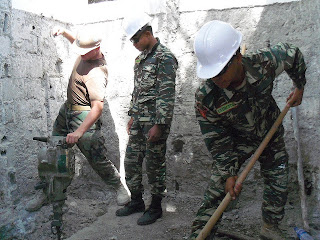 USA government has assisting  East Timorese force with training and education. Some of F-FDTL member now participating in IMET in USA.

The Government of East Timor and USA last year has signed a memorandum of understanding to explore the support for the new army. East Timor side has proposed to USA to help in building a navy base in the south of East Timor.

The base will be use as the joint exercise and to facilitate East Timorese Navy forces to control the illegal fishing boat, people smuggling and other illegal activities.


Some American marines are temporally in the country and helping the Timorese Defense force from engineering component in building schools around the country. (TS).
Posted by TEMPO SEMANAL at 00:05