Tempo Semanal-Timor, 04.02.2011
The Government announced today on the approval by parliament TL over the 2011 Budget. The office of Secretary State for Council Ministers welcome the, "Debates with a total budget allocation approved of US$1,306 million." 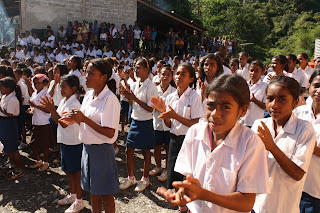 Secretary of State Ágio Pereira noted, "the thirteen-day debate was regarded as the most constructive, in depth and considered budget process yet. Reflecting a new spirit of collectivism and political will, the 2011 budget marks the most ambitious and bold measures taken by any Government to accelerate development and expedite human and capital development.
It said, "Two special Funds have been established: the Infrastructure Fund allocated $599 million inclusive of an additional $282 million for power and the Human Capital Development Fund allocated $25 million. Both funds will be managed and monitored with international best practice processes and regulations."
The press release also explain, "$65 million from the Infrastructure Fund is allocated to the MDG Suco program in 2011 to provide 11,140 houses across the Nation. Five new homes will be built in each of Timor- Leste’s 2,228 aldeias (hamlets) this year with the goal to improve the living conditions of over 55,000 vulnerable families in rural areas by the end of 2015. Other works under the MDG Suco Program will include small-scale infrastructure in solar power, water and sanitation, and roads in addition to other community based works."
"The Decentralized Development Program (PDD) allocates $15.5 million at the aldeia, suco and sub-district level and $28.8 million at the district level to develop local business and engage rural communities in the development process. Programs such as the Decentralized Development Program (PDD) and the MDG Suco Program are innovative modalities for more equitable development of rural areas while giving direct ownership to the citizenry to rebuild their communities."
"The Contingency Fund increased to $49 million for food security specifically given the adverse weather conditions in 2010, $14 million was allocated for the veterans, an increase from $1 million to $3 million was allocated to strengthen democracy through the political process and increased funding was provided to widely implement the Domestic Violence Law through education and socialization campaigns across the thirteen districts of Timor- Leste."
"Secretary of State Ágio Pereira noted that the motto Goodbye Conflict, Welcome Development was embraced through action by the Government, the Institutions, National Parliament and the People with their commitment to nation building which was evident in the progress achieved over the last three years."
“Through progressive social and economic policies, institutional reforms and most importantly, prioritizing ownership and responsibility by the State, our Institutions and our People, we have cultivated a strong sense of unity, responsibility and ownership of National Development. Peace, stability and security have been underscored by mobilization of targeted expansionary fiscal policies to meet the most urgent needs of the Nation and now we turn our attentions to those core foundations necessary to rebuild the Nation. Our action has demonstrated that stability is expedited through economic stimulus and continued growth is consolidated through stability. Peace and economic stimuli post conflict are inter-mutual and with a commitment to both, we as a Nation can grow to eradicate poverty and ensure a quality of life for all our citizens. The debate on the 2011 Budget with the maturity and integrity shown by the legislators, media and the IV Constitutional Government, demonstrates that our constitutional democracy is flourishing and consolidating, and is turning into an important asset for future generations.”
The oppositions and Civil society criticizing Xanana's Government to take out big amount of money from oil fund. They argued that the Government spending is unsustainable to East Timor oil fund.
But Bishop Baukau agreed shows his support for 2011 huge budget but waiting to see it's result. "The problem is not the big budget. I think as long as long as it doing good for the country it's no problem," Bishop Basilio do Nasimento told the media after met with PM Xanana early this week. (TS).
Posted by TEMPO SEMANAL at 19:40