Max Lane Predicted Indonesian Is Getting Close to a Political Crisis 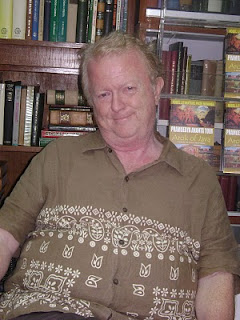 On Thursday (03/02) around 9.00 Dili Time, DR. Max Lane from Institute of Asia in Melbourne University will hold a public lecture in the old Campus of East Timor National University beside the UNMIT Obrigado Barraks compound in Kaikoli. “I hope there will be a series of public lectures about Indonesian Economy, politics and cultures. Obviously Republic of Indonesia is East Timor huge neighbour and it’s important for East Timor’s universities to have capacity to analyse and to understand what’s happen in Timor Leste’s main neighbour Indonesia,” said Prof Max lane in an interview with Tempo Semanal today.
He added that, “Tomorrow I will basically concentrating on what have been political processes plusses and minuses during the ten years since the fall of Dictator Suharto and of course was the main who decided to invade Timor Leste in 1975.”
“Whatever the political processing since then plusses and Minuses and what the economy prospects for Indonesia and what is the connection between the political problems of the country and their economic situation. “
“I basically be talking about how there are increasing tension and contradictions in Indonesian politics and Economics which means I think that some times in the next few years there will be a very big crisis in the Indonesian political situation. I think there can be a very positive outcome to that. But that also depends on what different actors do. I am going to be talking about what is likely to happen in the next five years in the Indonesia Political and economic scheme. “
“I think the first thing there is a major vacuum in terms of political leaderships. There is increasing un happiness with current President on the one hand and no real popular candidates for the next president on the other. So there is a crisis developing whether there will be a vacuum of political leaderships and at the same time the social and economic situation for 80% of the Indonesian people is very bad, poverty is very great, the prices of the basic needs continues to increase. So there is a lot of social discontent. So when you have on the one hand political leadership’s vacuum and on the other hand increasing social and economic discontent. “

Recently according to some religious leaders criticised Indonesian Government publicly but none have predict until when the situation remain calm.

“I think in some point, in the few years you will get a formal social and political explosion but I think it’s impossible at the moment to predict the exact way that this will happen. Whether it will be next year, the year after or the year after and exactly in what kind of forms it will take. I think at this point very difficult to predict,” said Max.

According to Max the Democracy in Indonesia consider much better than it was of course under Suharto. “I will classify Indonesia as liberal democracy minus. It has many aspects of liberal democracy like Timor Leste for example. But in Indonesia there are still a number of things that are banned. Some ideologists are band like socialism and Communisms. Some religious Ideas are banned like atheism or interpreting your religious books or scripts according to your individuals believes. So its democracy liberal minus which are also cost some problems I think in the next few years when people want more than that.

Max said Economically East Timor economy is very small and its only in the beginning of its economy development. “I think economically Timor Leste is not economy significant for Indonesia.”

“I think East Timor as part of the archipelago Indonesian or the Malay Archipelago. I think good relations between the common people, between the intellectuals and students in the two countries will be beneficial because I don’t think either Indonesia or Timor Leste can develop separate from each other. “

“I think there are two things. I think economically if Indonesia can develop a strong egalitarian economy with social justice then Timor Leste will have good trading partner and a good source of expertise and other economy resources as its neighbour. If Indonesia fails to develop economically then there will be a social explosion in Indonesia with consequences you cannot predict. “

‘Secondly I think Timor Leste, Indonesia, Philippine and Malaysia in terms of common people all face the same problem how to deal with super strong western economies and how to make sure they don’t over exploit The region. I think in that sense the common people of Indonesia, Philippine, Malaysia, Singapore and Timor Leste will need some unity to be able to deal with the imbalances between the local region and the super big western economies. “

East Timor and Indonesia share land border and most of the basic need are importing from Indonesia. (TS)
Posted by TEMPO SEMANAL at 00:00