PRIME MINISTER AND MINISTER OF DEFENCE AND SECURITY
KAY RALA XANANA GUSMÃO's SPEECH AT JOHNS HOPKINS UNIVERSITY
Washington DC 24 FEBRUARY 2011
Your Excellencies
Ladies and Gentlemen,
First and foremost, allow me to say how happy I am, to be here today, at the prestigious John Hopkins University, to share with you a reflection on the Timorese experience in its transition from conflict to development. 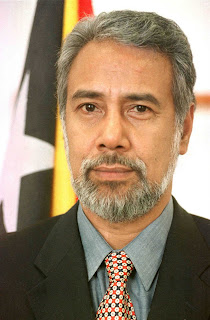 could you please upload the video of this speech?

"We managed to create strong and dynamic growth, able to fight unemployment not only in the Country’s capital but also in the countryside, by way of funding a decentralised private sector building fund..."

Just another example of Gusmao talking bullshit to a foreign audience.

His audience should go for a holiday to Bobonaro, and try to find any sign of "strong and dynamic growth"!

TL has recently started from the scratches deeply after vast destructions of 1999 (Palace of Ash). Now it time to plant deeply forward so honestly, how much of economic growth that we have achieved it is still not really counted for at this moment depite depositing in surplus dollars and oil well. So now, TL has to plant, build up more and more.