FIFA President planned to visit the half island nation of Timor Leste on 14-15 March 2011. Mr. Blater will going to inaugurate the country's first football training center which funded by world football organization.

The training center will name after East Timor's former guerrilla leader and first President after it's restauration 2002, Mr. Xanana Gusmao. FIFA has spent more then a million US Dollar to help set up and develop a new and modern facilities for East Timor national team in the heart of Dili.


A preparation team from FIFA is now in Dili to check the conditions of the two new building located in Democracy field. According to FIFA's technical Director, Marcos Antonio Falopa who is in Dili highly praised East Timor's Football Federation team and their good work.  Mr. Falopa said Mr. Blater's visit is a historical moment for Timorese football. 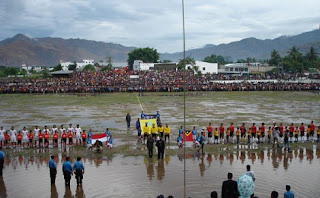 East Timor still luck of facilities and the there are not many football field meet the standards but Mr. Falopa said there are many enthusiasms from the young talent Timorese players. "The most important here, you can see there many Timorese young people and kids are very skillful in football," said Mr. Falopa who has watching Timorese national team on training by their South Korean coach.

Since 2002 East Timorese national football team has participating in various competitions including Arafura Game, Suzuki Cup and others. The national team under the south Korean coaching has wing various team from other countries including last year they have draw with one nation and beat three country.

Mr. Lay said since 2002 East Timor's Football developing and under his leadership the East Timor's FFTL has set up it's fourteen branches in the country.

Yesterday the FIFA's team in Dili meet with deputy Prime Minister whom acting PM, DR. Jose Luis Guterres in his office to discuss the preparation.

East Timor main stadion in the capital of Dili still in poor conditions but Mr. Lay said this year FIFA will  going to help East Timorese football associations to develop the soccer training center. FIFA will fund the rehabilitation and development of station for training center including lighting. (TS).
Posted by TEMPO SEMANAL at 23:42