The Atlantic: How the G20 Can Fix International Aid

Edward Rees - Edward Rees is senior adviser to Peace Dividend Trust. He previously worked with the Peacekeeping Best Practises Section (PBPS) of the Department of Peacekeeping Operations (DPKO) at the UN Headquarters in New York and as Political Officer to the UN Secretary General's Special Envoy in Timor-Leste. 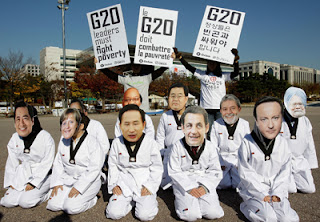 Image: Protesters in Seoul, dressed as the world leaders convening nearby for the G20 summit, call for a great focus on alleviating poverty worldwide. By Chung Sung-Jun/Getty Images.
Posted by TEMPO SEMANAL at 00:52