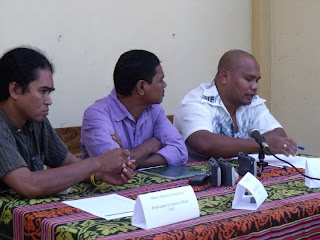 Since November 18th 2010, UNMIT lost a lot of simpathy from East Timorese after the so call "thorsten affair" power point presentation during a roud table discussion about regulation for Private security Companies.

"The Recently the second “Roundtable Discussion on Private Security Companies” was held at ETDA in Comoro. One of the presenters was a legal advisor for the UN Security Sector Unit. According to the Tetun version of UN legal advisor Andre S. Thorsen’s PowerPoint presentation, “An individual who has license may use weapon when carries out work as private investigator or security guard when he/she gets authorization to carry weapon according to the law that is in effect”. As this presentation was written in Tetun, and the fact that Fundasaun Mahein considers Tetun as the official language of Timor, then what was written in Tetun, and presented at the discussion is considered to be an accurate representation of Mr. Thorsen’s words. If that advisor denies that these words were presented, then why was the PowerPoint presentation written in Tetun and why was the national flag used as the background?"

The organisation recall, "the  history of Timor-Leste has been full of torture and violence because of weapons. Incidents such as in 1975 decolonization, 1999 referendum, 4 December 2002, 2006 crisis, and the 11 February 2008 attacks are evidence of events in Timor-Leste’s history where weapons caused big problems in this country."


"According to regulation UNTAET/REG/2001/19, passed on 21 July 2001, before the UN transferred sovereignty power to Timor-Leste in 2002, the UN bought 750 pistols all together for PNTL," said Fundasaun Mahein.

As Fundasaun Mahein point out the event of December 4th, 2002 two people were killed and many others were injuried and public believed it was cause by the UN bought pistols. None were in Jailed for pulled the triger.

Fundasaun Mahein rejects the accuracy of the statement by the UN adviser, in Timor Post’s Thursday (25/11) edition, where he denies that his presentation mentioned private security guards carrying weapons. His words are incorrect because his Tetun version PowerPoint presentation clearly showed that the UN apparatus suggested the government create a law allowing private security guards to use weapons and guns.

According to the Constitution of RDTL, Article 146 lines 1 through 3, and Article 147 lines 1 through 3, civilians are not allowed to use weapons or guns. Only the institutions of F-FDTL and PNTL are able to use weapons in order to guarantee the sovereignty of this new country. Similarly, the National Defense Law in the Article 4 line 2 that says it is the military’s competency for the National Defense to carry weapons, so that F-FDTL can provide military defense to RDTL, in accordance with the terms of Article 146 of the Constitution. This article also prohibits any paramilitary associations or any other groups to be armed with guns.

Fundasaun Mahein’s monitoring and research regarding security and defense sector issues in Timor-Leste, strongly condemns the proposal or suggestion from the UN apparatus that the government and the state of Timor-Leste allow civilians to use weapons and arms.

"Fundasaun Mahein is in agreement with statements from the President of the Republic Jose Ramos Horta, Prime Minister Xanana Gusmao, Second Commander of F-FDTL Brigadier General Lere Anan Timor, and Secretary of the State for Defense Julio Tomas Pinto, who all disagree with the idea or proposal from the UN apparatus regarding civilians and weapons."

The organisation in agree with most of East Timorese politisians in Parliament, oppositions and Government who said the heavy guns should remove from East Timor police.
"FM is very happy with the statements from the leaders and FM suggests the government continue to debate in public about the issue of weapons, and asks the government to take away heavy guns such as rifles from PNTL, and have them only use pistols. Heavy guns must be used by F-FDTL only, and private security guards cannot be allowed to use guns."

The organisation recommends the government create an effective mechanism for managing the weapons of the institutions of F-FDTL and PNTL in order to prevent inappropriate use and violations of the law and order in Timor-Leste. (TS)
Posted by TEMPO SEMANAL at 01:22

This is just nonsense. The Power Point clearly states that these are examples of solutions that have been suggested. It has always been the UN's position that this not occur this has not changed the advisor should be taken at his word.