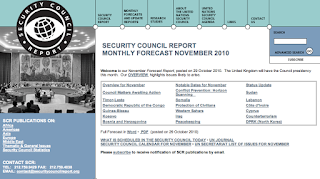 A delegation from the UN Security Council was schedule to visit Timor-Leste in a few days.  However, Tempo Semanal sources have revealed that the delegation has cancelled its intentions.

Some days ago the NYC based "Security Council Report" issued a statement saying that:


"The Council is considering a visit to Timor-Leste at the end of November. , as the lead country on Timor-Leste, has pushed for this visit. The number of Council members going on the mission was uncertain at press time. While no members have objected to the visit, it appears that a number of countries will not be represented at ambassador level and some members may decide not to participate at all. A decision also had not been made on whether the Council delegation should confine the visit to Dili or consider a field trip outside the capital. The last Council visit to Timor-Leste was in November 2007.  will lead the mission. It has argued that it is time to review the UN Mission in Timor-Leste (UNMIT) prior to mandate renewal on 26 February 2011.  appears keen to have the visit take place before it leaves the Council at the end of 2010. It may also want to discuss the format of the UN presence post-UNMIT, but others feel that this would be premature.

Based on the views expressed in the 19 October debate other Council members are likely to be interested in exchanging views with the Timorese authorites on the security situation, the resumption of Timorese responsibility in the final three districts and justice and accountability issues. A number of members, including the , the  and , seem to be looking forward to an exchange on justice and impunity."
Based on Tempo Semanal sources trip has been cancelled due to the fact that Timor-Leste is no longer a priority issue for the Security Council and that its time is being allocated to other more pressing matters.
Posted by TEMPO SEMANAL at 16:10