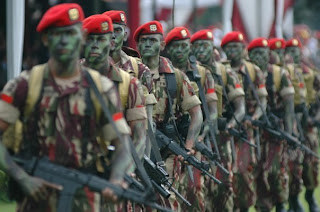 November 12, 2010
by Markus Junianto Sihaloho
The Indonesian Military chief has confirmed claims by a rights activist that the armed forces are actively carrying out intelligence gathering in Papua, and defended the move as crucial for national security.
On Tuesday, former journalist Allan Nairn, co-founder of the East Asian Timor Advocacy Network, posted a 25-page document on his Web site that he said had been prepared in 2007 by the Army’s Special Forces (Kopassus) in Jayapura, the provincial capital.
The document details plans to gag prominent rights activists and government critics through smear campaigns and intimidation, after infiltrating their churches, NGOs, universities and rights groups.
On Thursday, Adm. Agus Suhartono, the recently appointed chief of the Indonesian Military, admitted that they were involved in intelligence gathering operations, but only to guard against threats to the nation’s sovereignty and to back up police operations there.
He rejected the idea that gathering intelligence among civilians was wrong, saying all intelligence operations in Papua served to detect and prevent separatist threats.
“What we’re doing is maximizing the use of our intelligence unit for the sake of the military and the country,” Agus said.
He added the operations were always carried out by officers sent over from the military’s central command, including from Kopassus and other elite units. Agus said that while he had not yet been able to confirm the validity of the document posted by Nairn, he deplored the fact that such a document could have been leaked.
“I will stress to my subordinates the importance of maintaining security, to prevent any future leaks of information.”
Meanwhile, intelligence analyst Wawan Purwanto said the military was justified in carrying out whatever operations it deemed necessary in Papua, given the continued activities of the separatist Free Papua Movement (OPM).
“It’s impossible for the country to close its eyes to such a threat,” he said.
Wawan argued that intelligence gathering was a common practice in most countries, as it was necessary to assess information about a threat before drawing up policies to deal with it.
“So it’s perfectly legal to conduct such operations. The intelligence gathered helps inform the country’s future policy direction,” he said.
Mahfudz Siddiq, chairman of House of Representatives Commission I, which oversees defense and foreign affairs, agreed the military’s intelligence gathering tactics in Papua were necessary.
“The military is obliged to guard border areas, and besides, they have to deal with the OPM there,” he said.
Mahfudz added that while Papua was not technically a military operation zone, like in Aceh during the height of the secessionist struggle there, covert operations should not be considered illegal.
“That’s just a routine non-war military operation allowed by the law,” he said.
However, he said his commission would seek an explanation from the military about the issue later this month.
Posted by TEMPO SEMANAL at 09:59

The Whopper Man and Him Fish Story
I am a citizen who always defended this nation even under any circumstances, because I love the Indonesian people who have given me shelter in this country.
I say that that was launched by journalist Allan Nairn is a big lie, a story that he now is not based on facts on the ground, my question is if he ever fell directly in the field or simply quoting from the News paper?

No more he (Allan Nairn) only freelancers who pursue deposit with the publications that are cheap, the main objective is Allan Nairn and Money Money Money .. ..
We as citizens Inedonesia not to be affected by such a person, we must believe in ourselves, thus we will become a soulless Citizens Nationalist, Patriotic and become a great nation.
Let us look backward ... WHY .. WHY .. Why .. Why .. Allan Nairn did not dare to publish the depravity of their own country .. For example Document Secret War in Afghanistan (NATO), which is leaking, then the Iraq War .. Secret Documents Where's Your voice I waited Your Atention Allan ... ..

She could only scream human rights in Indonesia but so human rights are violated by the people he's just quiet down SHY .. .. SHY SHY SHY and continue. Allan look in the mirror ... Do yourself and your people are good in God's eyes ...
So, Thank You For Your Attention ..
From Indonesian Patriotic.