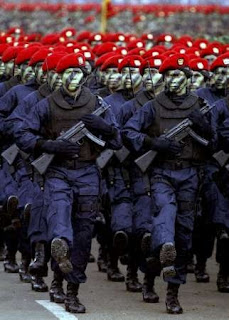 The Rev. Socratez Yoman was supposed to attend the Papua Baptist Church’s annual congregation meeting in the provincial capital, Jayapura, in February, but on the eve of the event, two of his most faithful disciples discouraged him, saying there was a possible plot on his life.

“I cannot forget that evening,” he told the Jakarta Globe over the phone from Jayapura. “The churchgoers must have overheard something. They must have run as fast as they could to my house because they seemed to be out of breath. Before I could offer them something to drink they begged me not to go to the meeting” the next day.

Yoman persuaded the men to sit down and explain to him what they had heard.

“There are two factions within my church: those who support my cause and those who don’t,” he said, adding that his opponents were planning to stage a demonstration during the meeting.

“My disciples told me that [my opponents] had devised a plot so that there would be a scuffle in the demonstration, forcing law enforcers guarding the event to fire warning shots,” he said.
“But, one of the bullets would be meant to kill me.”

The 41-year-old priest has been an active critic of the government, particularly advocating against the countless cases of unresolved killings of civilians in the restive provinces of

Papua and West Papua, allegedly perpetrated by members of the military and police.

“I have had many people come to my home in the middle of the night seeking refuge, saying they are being hunted by the military. In return they offer me corn and sago, but I always refuse,” Yoman said.

He compiled accounts of the human rights abuses he had encountered over the years in his 2001 book, “The Gateway

Towards a Liberated Papua.” In 2005 he wrote another book, “Papuans Are Not Separatists,” which fiercely criticized the military and the government.

The two books propelled Yoman to fame and he was asked to speak at various national and international human rights forums. He was also granted access to prominent church leaders and human rights activists in the United States and Australia.

But his fame appears to have come at the cost of his own safety.

Last week, Allan Nairn, a freelance journalist and co-founder of the East Timor Advocacy Network, posted a 25-page document on his blog that he claimed was prepared in 2007 by a clandestine eight-person unit of the Indonesian Army’s Special Forces (Kopassus) in Kotaraja, a suburb of the Jayapura.

The document outlined plans for Kopassus to infiltrate churches, nongovernmental organizations and universities in Kotaraja and identify the most vocal members in each institution, especially those critical of the government. It identified 16 people as “enemies of the state” and Yoman’s name was on top of the list.

The people on the list “are highly critical toward the military and the government, a behavior that can only be explained by their lack of belief in Pancasila,” the document says, referring to the national ideology.

“Measures must be taken to silence them by reducing their credibility and influence on the people” of Papua.

The document acknowledged there were no armed combatants operating in Kotaraja at the time and said the unit was targeting unarmed political activists.

Kopassus spokesman Lt. Col. Zebu declined to comment on the revelations detailed in the document but pledged to examine the authenticity of the report.

Although he declined to name the parties responsible, Yoman confirmed that he had experienced frequent intimidation.

“In 2006, I was ambushed and taken to a dark alleyway with a gun pointed at me. They didn’t say anything but I knew it was an attempt to silence me,” he said.

“Later that year, someone burned my car, which was parked just outside my church. I have had numerous death threats and intimidation attempts.”

But Yoman said that in 2007, the time the document was said to have been prepared by Kopassus, the intimidation tactics changed from physical threats to smear campaigns.

“Someone had been distributing fliers and sending text messages to people in Jayapura and Nabire in a bid to defame me. They said I had taken a prostitute from North Sulawesi as a wife; others said I was responsible for a man’s murder,” he said.
“None of that is true, and thank God the people of Papua didn’t believe it either.”

The Rev. Benny Giay, from the evangelical Kingmi Church, the largest in Papua, was also among the 16 people named in the document leaked by Nairn.

Giay seemed unperturbed, however, saying he had been on many watch lists before.

“I have had people following me. The military even set up a post just in front of my theological school. My every move is being monitored,” he told the Globe.

Giay often communicates with international rights group such as Amnesty International and Human Rights Watch, highlighting cases of injustice in Papua. His 2002 book on the murder of Papuan leader Theys Hiyo Eluay was banned by the government.

“I have been placed under house arrest and my passport has been revoked many times despite the fact that there is no criminal charge against me,” he said.

On Thursday, Adm. Agus Suhartono, the recently appointed chief of the Indonesian Armed Forces (TNI), said the military was actively carrying out intelligence gathering in Papua, and defended the move as essential for national security.

But the military leader refused to take responsibility for the alleged intimidation campaigns and smear tactics against church leaders and activists. “What we’re doing is maximizing the use of our intelligence unit for the sake of the military and the country,” he said.

He added that the operations were always carried out by officers sent over from the military’s central command, including from Kopassus and other elite units, but claimed they were only to guard against threats to the nation’s sovereignty and to back up police operations in Papua.

Agus said that while he had not yet been able to verify the document posted by Nairn, he deplored that such a document could have been leaked.

“I will stress to my subordinates the importance of maintaining security, to prevent any future leaks of information,” he said.

Intelligence analyst Wawan Purwanto said the military was justified in carrying out whatever operations it deemed necessary in Papua, given the continued activities of the separatist Free Papua Movement (OPM).
“It’s impossible for the country to close its eyes to such a threat, particularly because it is impossible to distinguish between armed combatants and political activists,” he said.
Mahfudz Siddiq, chairman of the House of Representatives Commission I, which oversees defense and foreign affairs, said he supported the monitoring of civilians despite the fact that Papua was not technically a military operation zone.

However, he said his commission would seek an explanation from the military on the matter.
Yoman said that the intimidation would not steer him away from advocating for civil rights in Papua.
“The threats have done nothing but solidify my belief that I am doing God’s work.”
Posted by TEMPO SEMANAL at 23:12