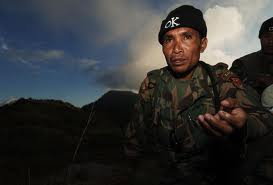 The Timor-Leste Government has continually said that the case of the petitioners has been resolved when they got a recuperation package so that they could return to civilian life.  But former Lieutenant Gastao Salsinha, who was imprisoned shortly for an attempt on the life of the Head of State and Prime Minister of the RDTL on 11 February 2008, is still dissatisfied so as to send a team of Petitioners with certain demands from the institutions of the state.

The spokesperson for the Petitioners says that he still considers the Petitioners as members of the military forces because they have not been officially expelled despite the fact that the state has decided on a number of occasions and paid them moneys for them to recommence their lives, but he himself has not yet received such a payment.  According to government sources Gastao Salsinha as well as the others who were imprisoned did not receive any payment of moneys because they were in prison at the time.
Salsinha, who was imprisoned from April 2008, sentenced to imprisonment and pardoned in August 2010 by the victim himself of the February 11 attack, Dr Jose Ramos Horta, is saying that petitioners were used politically to join certain political parties in order for them to win the elections.  Let us read together the exclusive interview by Tempo Semanal (“TS”) with the leader of the petitioners, Gastao Salsinha (“GS”) on 27 December 2010 as follows below. 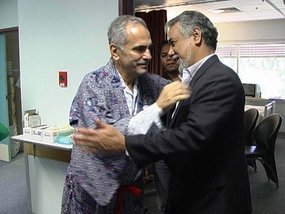 TS: Mr. Salsinha, can you explain a little about how you felt upon being released from prison?

GS: In principle, I felt happy when we were released from jail. Because each one of us were able to return home and be together with our families and all those people who supported us during all that time.  Also we could say it was like we were coming out from the dark, stepping into the light.  Something like we were a bit happy because there was so much that was still not right yet.

TS: Maybe you can explain what according to your point of view is still not right yet?

GS:  The things that are not yet right are things such as this; right from the beginning we were talking about truth and justice.  Where, when we look at what is the case today, justice has been for some people only.  But for those, we can say are in power, there has been no justice applied with respect to them.  Because of this that we say, some things are not quite right yet and many things are still not as they should be.
TS: You say justice has been only for the little people and is not applied to those who are in power.  Perhaps according to your point of view whom do you think should be held accountable before justice who have not yet been held accountable?
GS:  regarding this I think we do not need to cite their names any again.  Because everything we have seen in the inquiry from the international commission, which already mentions who was involved in the crisis.  Those who really need to be held accountable before the courts, their names are all there, in the international commission. So I think that if it is good enough even if I do not specifically mention their names again.
TS: There is some information that on the 20th December last you and a group met with the Prime Minister, Kay Rala Xanana Gusmao.  May we know what were your objectives in meeting with the Prime Minister?
GS: I did not meet the Prime Minister, but I delegated a team, made up of eight petitioners.  They took a letter of letter of demand or statement letter from us to him.  The letter was addressed to the President of the Republic, President of the National Parliament, Prime Minister as well as to the President of the Court of Appeal.  I did not go myself but I delegated a team to go.

TS:  Maybe we can know the points of demand that you delivered?
GS: Regarding our demands, firstly we made demands regarding our status.  On our status, we have demanding this since 2006 until now, from the month we were expelled by the Brigadier General, the present major General Matan Ruak; this we continue to demand that we are still members of the military forces. Because we have not yet been expelled, nor has there been a written statement from the state or the government to this effect. Because of this that we demand that the state has to make some statement regarding our status.  Then it will be the time to go to court.  Do they say we are still in the military, or are we civilian, or traitors, or criminals, or rebels?  They will have to state that publicly.  That is what we demand of our four leaders.

TS: What work have you been doing since being released from prison?  We would like to know whether you have been active in business or as a farmer?

GS:  You can say that I am currently returned to farming.  Because I have just been spending time doing nothing with my family.  So I have been doing a few small odd jobs around the house, clearing the plot of land for cultivation or clearing the coffee bushes.  That is the work I do daily.

TS: After you were imprisoned who gave financial support to your wife so that your children could attend school?
GS: After I was imprisoned not one person helped my family.  No political party or any other group, also no. Only my extended family provided for my wife and children up to the time I was released from jail and to this day.
TS:  As a leader of the former Petitioners, do you feel perhaps that you still have a moral responsibility to your members? If you do feel this responsibility towards them, then what might you still do?
GS: Firstly, I will consolidate them again.  Bring them come together again, discuss again the issues regarding the petitioners. That is my main objective. Because I do not want them to remained dispersed and then fall into other peoples’ political games.  So I invited them to talk with them so that cases like 2007 do not repeat themselves when the petitioners were used by political leaders for their own political interests and then in the end they did not want to assume their responsibility.   It is because of this that as their commander and their spokesperson, I will continue to advise them.

GS: Those who are now in power.

TS: From what you are saying the petitioners have become victims to other persons’ interests and you regret that you fell into their political trap.  Is that right?

GS:  That is clear that we fell victims to some politicians.  We can say, not only did we fall into their trap…..we did not just fall into their trap but we fell right into it, fell right into it.  Because it was all their gamesmanship. They played with us as if they played cards. To promote their own interests.  Because alone they would not have been able to achieve their objectives.  But we became like a bridge for them to come and go.  Once they reached their goal, they denied us and said we were rebels.

TS: But the State represented by the Government that took this power, in 2008 because of the events of 11 February, has paid recuperation moneys to the petitioners to enable them to reintegrate into the community as civilians.  Why are you still dissatisfied?
GS: As far as the recuperation moneys paid to the petitioners to return to civilian life in their communities is concerned, to me that is unimportant.  You cannot resolve a problem with money.  To resolve a problem to its core there has to be an acceptable solution.  What is important is that all parties agree on a decision. Only from such an agreement can you either pay out or not.  This problem only reached midway and it was forgotten, then such a payment as was made as far as I am concerned is unsatisfactory with the decision that the government made.
TS: Did you receive the recuperation payment from the state?
GS: I, as well as my other colleagues who died during the crisis together with those of us who were imprisoned; we did not receive any recuperation payments. To me whether or not we received the payment, it is a matter for the state. Whether or not the state thinks that we have equal rights, the decision is for the state.
TS: Now you are saying that you want to avoid the petitioners becoming the political tools of other people, perhaps as per information is being bandied about, you will be forming a political party?
GS:  Aaaaahhhh…..on this I can only apologize, perhaps.  Because I do not have any interest in forming a political party.  (TS)
Posted by TEMPO SEMANAL at 18:23