This newspaper report that UNMIT has according to the UN Office for Internal Oversight Services (OIOS) failed in its security sector reform mission at great cost to the taxpayers in Australian, Norway and the EU.  It can also report that an audit also discovered that at least one UN staff signed an agreement with the Timorese Government not to cooperate with his employer in the provision of details of his advisory role in defence matters.

In 2006 UNMIT was mandated to provide assistance to the Government in the conduct of a comprehensive security sector review on the roles and responsibilities of the PNTL and F-FDTL as a result of the crisis of 2006.  UNMIT establish the Security Sector Support Unit (SSSU) in order to manage this review.  To date that review has not happened.


In 2009 the CIC stated that the "UN has lost the credibility necessary for the current Security Sector Review process to fulfill this role. Without committed support and cooperation from the government of Timor-Leste, the likelihood of undertaking a successful review – let alone one that will be politically implementable – is minimal."
This newspaper report that on 23/12/2009 the UN chief investigator and auditor submitted the "Audit Report, Management of the Security Sector Support Programme in UNMIT - UNMIT's Support to security sector review and reform in Timor-Leste has not been fully effective UNMIT AP2009/682/02 IAD".  Readers may access the entire report here.


The purpose of the audit was the assess the effectiveness of the SSSU in the conduct of its tasks in UNMIT.  The SSSU has approximately 14 internationals staffs costing the taxpayer approximately $3.1 million/year.  The SSSU also has $4 million in funding from the Norwegian, Australian and EU taxpayers.  These project funds were given to UNDP.  The Project document outlined here. The OIOS audit shows that the funds are largely wasted.


The audit had several findings.  Firstly it found that the SSSU and UNMIT have failed to established and coordinate good relationships with Government and other international actors.


"The Mission is expected to coordinate its work with other partners in strengthening security institutions, but there was no consolidated or clear methodology and plan of action developed in collaboration with the Government and other national and internationals actors for the security sector reform.  Attempts by the Mission to agree its priorities with the Government did not achieve the desire results."


"The Government's lack of cooperation with and interest in UNMIT's support, and the Mission's failure to conduct the required reassessment of its staffing needs for the security support program, resulted in the under utilization of advisers recruited by the Mission.  Only two of the eight advisers on-board were co-located with their counterparts and many advisers complained that the Government did not request for their input into reforms initiatives".


Thirdly, the audit found that the Mission "Mandate Implementation Plan" (MIP) for the SSSU was never implemented as the Government never cooperated with it.  The MIP can be found here.


"According to the Mission the Government did not respond to its request for the Government's views on the draft MIP and the proposed role of the SSSU".


The audit also found that the UNPOL Rebuild Restructure and Reform plan for the PNTL was never endorsed by the Government or the PNTL.  As a result it is clear that the UNPOL have been following on plan since 2006, while the Government have been following their own plan.
As in the below it shows that UNMIT SSSU failed to perform its role as many tasks remain unperformed - despite millions of dollars being expended.  The Review project, the capacity building and the security survey costing millions have yet to occur even 11 months after the UN OIOS found out that they had not happened as of Dec 2009. To read the multi-million dollar project document of the project "that never happen", see here, signed by SRSG Atul Khare and PM Gusmao.
Staff Misconduct in the SSSU:


This newspaper can report that a UN adviser in the Office of the Secretary of State for Defence SoSD, "signed a confidentiality document stating that he would not share any information he gained in the office of the SoSD with any party, including the UN".  The audit states that this is a clear breach of UN staff rules Regulation 1.1(b) and that as a staff accountable to the UN and should therefore be "personally accountable for violating UN Staff regulation 1.1(b)."  This newspaper can report that the staff member has been working for the UN in Timor-leste in the defence sector since at least 2005.  The audit states that UNMIT has only cautioned the staff member in question, but seems to still have employment with the UN in the same role.


When called by this newspaper the Chief of the Security Sector Support Unit, Mr. Murray Mccullough, declined to comment other than stating that "all the audits recommendations have been complied with".  A reading of the audit report shows that this is not accurate.


On 2 December Mr. Gorgy Kakuk responded to this newspaper's request for comment on (and in some cases copies of) United Nations Office of Internal Oversight Services, by stating that,


"OIOS reports contain confidential and sensitive information about individuals and United Nations operations and activities. Disclosure of such information may be detrimental to the Organization’s proper functioning, the welfare and safety of its staff or third parties, or may violate the Organization’s legal obligations. OIOS reports are therefore considered strictly confidential internal United Nations documents.  For these reasons, the release of reports for purposes other than to facilitate the disciplinary process is restricted to specific instances provided for under the OIOS mandate, as per global UN policy. Thank you, again, for your letter." 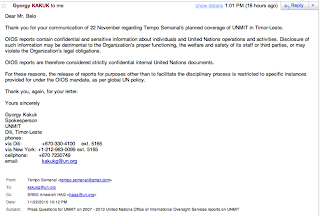 This newspaper will continue examing OIOS reports on UNMIT in the next weeks.