East Timor’s Secretary State for Council Ministers said, “recent news related to Woodside Petroleum’s activities in Western Australia has further reinforced the Government of Timor-Leste’s commitment to ensure proper process and due diligence in the development of Greater Sunrise. With a proactive approach in gathering independent information and assessments from reputable international companies to assist in evaluating Woodside’s submissions, scrutiny will be rigorous.”
The Press released which put out on December 8th explained, “Recently Standard and Poor’s Rating Services has announced the lowering of Woodside’s Corporate credit and associated debt ratings from A- to BBB+ after delays and higher costs have mired Woodside’s Pluto project. A $900 million blow out now takes the anticipated total cost of the Pluto project to $14 billion and the start up date has been pushed out by sixmonths.”
“ This is the second major cost adjustment since the project costs were originally calculated at $11.2 billion in 2007. The central reason for this latest cost blowout was the need to rebuild flare towers that did not meet cyclone specifications. Flare towers are a well established, tried and tested technology. This raises concern within the Timorese Government given the potential cost blowouts for the untested floating LNG technology proposed by Woodside for Greater Sunrise, which holds far greater risks than simple flare tower technology.”

“If similar cost blow outs were to occur with Greater Sunrise, the costs would effectively be paid for by the People of Timor-Leste; before any revenue stream flowed to the nation.” 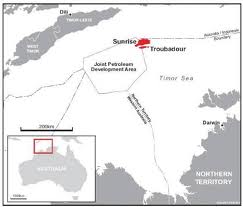 “Another Woodside project in Western Australia, the $30 billion Browse project, has also been featured in the Australian press of late, with a series of exchanges resonating with Timor-Leste’s experience. Managing Director, Don Voelte announced “We love the way it is going .. we see no roadblocks” whilst joint venture partner BHP Billiton boss Michael Yeager said that the project was yet to reach “concept selection” and that the project faced enormous technical difficulties. Voelte described Yeager’s comments as “absolutely wrong”. BHP Billiton is Australia’s biggest oil and gas producer."
"Similarly, Woodside continued to announce the Greater Sunrise project was progressing well when communications had all but ceased last year. The insistence of Timor-Leste’s petroleum regulator, the ANP that Greater Sunrise remained in the “concept selection” phase was met with a similar response from Woodside. In recent months, Woodside has relented to meet the conditions required by the regulators. Woodside has now presented the information on three development concepts; the pipeline to Timor-Leste option, the pipeline to Darwin option and the Floating LNG option, in order to comply. "

"The Government has consistently maintained their position that the option of the pipeline to Timor-Leste is the safest and most economically viable, following the spirit of the treaties covering the Timor Sea which promote shared benefits. The one productive field in the area, Bayu Undan, has its’ gas piped to Darwin, which has provided a huge boost to the Northern Territory economy."

Spokesperson for the Government, Secretary of State Agio Pereira, noted “we are confident that Timor-Leste has both the national and international expertise to assess thoroughly the development options for Greater Sunrise and we affirm our commitment to manage responsibly the resources of Timor-Leste. We continue to prepare for the commercial success of the pipeline to Timor-Leste and look forward to benefits flowing to all stakeholders, particularly our People.”