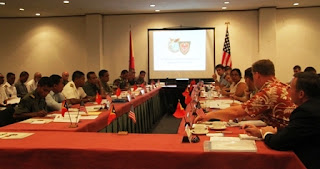 This afternoon in Dili the East Timor Secretary of State Julio Tomas Pinto accompanied by Cheif of the Defence Force Major General Taur Matan Ruak and several high ranking officersin the new national army discussed the terms of cooperation between the US and Timorese military institutions. The agreement is all about training and human capacity building including East Timor’s Defence Force be part of UN peacekeeping operations.
There was also some discussion on the matter between joint training with the US Marine Corps/Navay and the Timorese Navy. The Timorese Navy has two Chinese Patrol Boat which have limited capacity to patrol the southern coast. The Timor Sea is vulnerable to illegal fishing activities and illegal people smuggling to Australia while the Australians and Americans are reluctant to support the Timorese Navy with patrol boats. 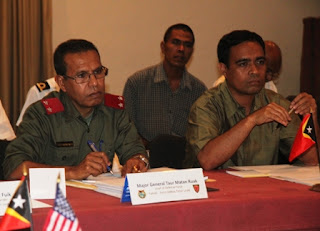 East Timor has already received much training from the US Marine Corps (USMC) and the Australian Defence Force (ADF). But the recent purchase of the the Chinese patrol boats has caused friction between the Timorese and US Governments. While China supports East Timor without conditions the USA and Australia continue to spend most of their money on technical assistance and advisers on so called "capacity building".
“This type of aid comes with many conditions such as respecting human rights, freedom of expression, justice, democracy and so on. I think the American Government is forgetting what they did to East Timor in the past. When we fought for human rights, justice and freedom of expression they supported the Suharto regime to violate the right of Timorese people,” said Augustinho da Costa Araujo, a university student in Dili.

He encourage the Timorese leaders to refuse aid which comes with conditions while those western countries try to dictate terms to the Timorese leadership. “I think if the Chinese offer aid to us with no conditions and it’s more realistic then other country lets accept it. I am very happy to see the Chinese involvement in the building of Timor-Leste's infrastructure such as the headquarter of F-FDTL and a hundred houses in Metinaro,” he explained.
Posted by TEMPO SEMANAL at 01:13

Hi all my Country people, what Augustinho da Costa Araujo, a university student in Dili. said was true, how ever we can't alone and chut us. but we have to open and create a cooperation we avery one in the world. so we what we they did to us that was their arrogant, but now we the planet is belonging to avery human been and no boarder. as long as we control our self by Nationalism and patriotism. please love your people and your Lovely State. we don't have any block in the World. I agree with him, remember our histry and keep our self to be save.