Video of Construction of Official Residential Palace for Finance Minister

At a little after 4 pm Tempo Semanal’s video team went to the Garden in front of the Motael Church to observe the statue being finished off by a company intended commemorate the victims of the Santa Cruz Massacre that is currently embroiled in controversy.  According to Tempo Semanal’s observations, it is interesting that the statue was slated to be inaugurated on 12 November 2012, is still being finished off. 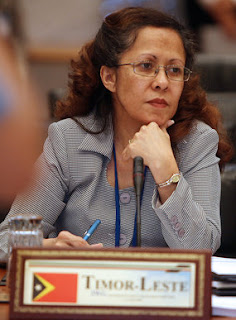 But whilst observing the construction process for the 12 November statue the our eye strayed sideways towards the road in the direction of the former residence of Francisco Lopes da Crus, where a team of Timorese and Indonesian workers are busy constructing the official residential palace for a member of government, according to the description from a worker, that this was the residence of a member of government.

“This is Madam Minister’s house.  We don’t know which minister but she is the Minister who walks with a bit of a limp,” said the worker to Tempo Semanal.

The public are unaware as to whether this project us a state funded project, because there is no notice board announcing publicly explaining who is constructing this building on the site of the former residence of Francisco Lopes da Cruz.  Normally all state projects are required to have erected on the construction site a signboard so as to inform the public regarding the cost of the construction, type of construction, duration and the company contracted to undertake the contract works.

“This is extravagant,” said a survivor of the Santa Cruz Massacre.

This three story building situated to the east of the Motael Church, will be complete with a staircase but more interestingly will be the first residence of a member of government to have an elevator installed.  According to the observations of Tempo Semanal, appears from the design and current phase of construction to be a luxurious home complete with a pool and tiled floors and some walls are also tiled.

According to information that Tempo Semanal obtained from some sources, “The construction of this palace for the Minister of Finance will cost more than one million dollars.”

“That is excessive, because this project was awarded on a single source and then directly awarded to another company to perform the works,” said a source close to the company that is currently engaged in the construction of the building.

He added, “This project should have undergone an international tender because it is in excess of one million dollars.”

It is extremely ironic that this monument will co-exist in the midst of such extreme poverty, where students and teachers daily complain of the conditions in schools that hamper the community’s ability to be educated, the community gnash their teeth because of the high cost of access to potable water, the persistent public demands to fix the roads, but then the Finance Minister is more concerned with constructing her palace first.

Engineers say that it would cost the state US$900,000 to build a one -story school, with six rooms (with three rooms on each floor) complete with office and toilets for teachers, given that the state has placed education as one of its priorities for this year.

There are other complaints regarding the construction of this luxury official residence for the Minister of Finance.  “Why doesn’t the government use this money to build a school, a health clinic or a public building in the rural areas so as to address the complaints of the people at the grass roots?  If the Minister of Finance has a heart, she can continue to put up a little longer with living in one of the houses in Farol that are empty,” said another 12 November survivor who works in the government itself.

The Fifth Constitutional Government is comprised of fifty-five members in total.  If each member of government demanded that they be provided with a residence costing US$1.5 million as the Minister of Finance is about to get, this will mean that the state of Timor-Leste will have to allocate a budget of US$82,000,000 to build residences for all of the members of the government.  However, when this newspaper asked some members of the government, they responded that members of government had the option of choosing between continuing to reside in private residences whilst being entitled to a monthly housing allowance or to reside in an official government house.

Tempo Semanal tried to confirm with the Minister for Finance, Emilia Pires on her official telephone number 772300XX, but the Minister is overseas and it was her secretary who answered her telephone confirming that, “that building is designated as the Finance Minister’s official residence.”

The secretary also confirmed that this official residence will be complete with, “a pool and elevator.”

When this newspaper tried to obtain information regarding the construction of this luxury house for the Minister of Finance, the secretary told us that we would have to confirm speak with the Chief of Staff of the Finance Minister, who unfortunately did not his/her telephone on the two occasions we rang his/her number.
Posted by TEMPO SEMANAL at 09:18

is this a private residence (as in the minister's private home or government residence thus state asset?